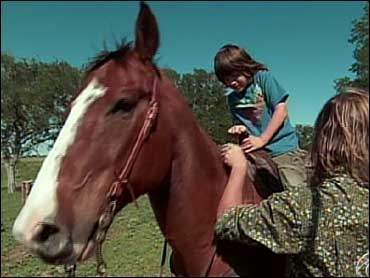 Rowan Isaacson may look like any other 7 year old today, but two years ago, life for both the boy and his parents was miserable - a constant series of tantrums, and little meaningful connection.

Doctors had diagnosed Rowan with autism, and like many parents in their situation, Rupert Isaacson and his wife Kristin were heartbroken, reports CBS News correspondent Don Teague.

His parents tried traditional treatments - everything from anti-yeast diets to behavioral therapy - but Rowan showed no improvement. None, that is, until the first time he sat on a horse.

"He would be in the midst of a terrible tantrum and Rupert would put him on Betsy, and it was like that - it's instant," Kristin said. "He would calm, he would stop."

"His language just started to pour out of him," Rupert said. "And the door into his mind sort of opened a crack."

The transformation was so extreme, his parents decided on another extreme: a quest to Mongolia, where the connection between humans and horses - and healing - seemed strongest. Weeks of riding lead to a bizarre, and for the parents, painful healing ritual at the hands of shamans, the medicine men of Mongolia.

"It really was remarkable to see how quickly he changed," Kristin said. "Pretty mind blowing actually."

Within days, Rowan was interacting with others, and his tantrums ended. More than two years later, the progress continues.

Is Rowan cured of autism? His parents are quick to say "no." But at the same time, he's doing remarkably better, and they believe his connection with horses is a big reason why.

So do others. Therapeutic riding programs have grown in popularity among parents of autistic children.

As for Rowan Isaacson, he still rides horses, and with traditional therapy, continues to improve.

Rupert wrote a book, "Horse Boy," about the journey.

And has opened a center where other autistic children can find their own connection with horses for free.

Rupert and Kristen really did go to the ends of the earth, and found someone they hadn't known...their son.