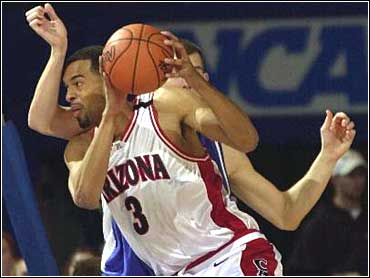 Loren Woods and Shane Battier bucked the trend and put their pro careers on hold, passing on the money for a chance to make their college experiences complete.

For taking that risk, the Arizona center and Duke forward have earned spots in the national championship game Monday - a trip no player has ever earned sitting on an NBA bench.

"The tournament is the best thing about college basketball," Battier said. "I'm on the cusp of a national championship. There's no better feeling, aside from winning it. Those who forgo this opportunity are missing out on a lot."

Last year, it was Mateen Cleaves who made the tough choice that paid off.

The Michigan State star came back for his senior season simply because he wanted to win a title. He cemented his place in the annals of college basketball, returning from a nasty ankle injury in the final to lift the Spartans to the championship.

"This is what I came back here for," Cleaves said after that victory. The money is better but his life isn't nearly as rewarding nowadays as he spends most of his time on the bench for the Detroit Pistons.

Like Cleaves, Woods and Battier felt loyalty to their schools and had a gnawing sense there was unfinished business to tend to.

Woods is the moody, unpredictable center who transferred from Wake Forest after his sophomore season, when the pressure of trying to become the next Tim Duncan became too much.

He's the one who said the Wildcats could e the "best team ever" and also the one who nearly folded when Arizona's season nearly deteriorated in January.

"It's more pride than anything," Woods said, explaining why he and Battier stayed. "Just two competitors. You just want to win as much as possible. You can't do it better, I don't think, than at Duke or Arizona."

Battier has already received ample recognition, winning Player of the Year honors from The Associated Press and a number of other outlets.

Still, memories of the 1999 season linger. Duke was 37-1 going into the final that year, the prohibitive choice to win it all, before Connecticut took the title away.

"They were talking about us as one of the great teams of all time," Battier said. "The game pressure that was on us was unbelievable."

He doesn't feel the same way this time.

Maybe it's because Duke isn't such a prohibitive favorite, in this, an exquisitely even matchup between the top two teams dating to the preseason polls.

Or maybe it's because of the perspective gained from a full four years in college, an experience more and more talented players pass on.

"You earn throughout your life, and you should be prepared for your life," Duke coach Mike Krzyzewski said. "If you just look at the start of your race, it being so financially lucrative, then maybe the end of the race isn't as much. Someone who takes care of the whole race might have a chance to do it a whole lot better."