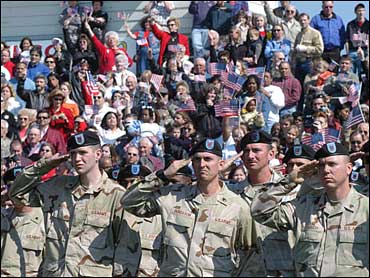 Strained by extended tours in Iraq, growing numbers of military reservists say the government is providing little help to soldiers who are denied their old jobs when they return home, Defense Department data shows.

The Pentagon survey of reservists in 2005-2006, obtained by The Associated Press, details increasing discontent among returning troops in protecting their legal rights after taking leave from work to fight for their country.

It found that 44 percent of the reservists polled said they were dissatisfied with how the Labor Department handled their complaint of employment discrimination based on their military status, up from 27 percent from 2004.

Nearly one-third, or 29 percent, said they had difficulty getting the information they needed from government agencies charged with protecting their rights, while 77 percent reported they didn't even bother trying to get assistance in part because they didn't think it would make a difference.

"This is shameful because Iraqi bullets and bombs don't discriminate. Yet reservists face job discrimination here in America after serving in war," said Paul Sullivan, executive director of Veterans for Common Sense.

Legal experts say the findings might represent the tip of the iceberg. Formal complaints to the Labor Department by reservists hit nearly 1,600 in 2005 - the highest number since 1991 - not counting the thousands more cases reported each year to the Pentagon for resolution by mediation.

And a bump in complaints is likely once the Iraq war winds down and more people come home after an extended period in which employers were forced to restructure or hire new workers to cope with those on military leave, they said.

Among the survey's findings:

"Most of the government investigators are too willing to accept the employer's explanation for a worker's dismissal," said Sam Wright, a former Labor Department attorney who helped write the 1994 discrimination law protecting reservists.

"Some of it is indifference, some of them don't understand the laws involved," Wright said. "But the investigators establish for themselves this impossibly hard standard to win a case. As a result, reservists lose out."

Under the law, military personnel are protected from job discrimination based on their service and are generally entitled to a five-year cumulative leave with rights to their old jobs upon their return. Reservists typically file a complaint first with a Pentagon office, the Employer Support of the Guard and Reserve (ESGR), which seeks to resolve the dispute informally.

If that effort fails, a person typically can go to the Labor Department to pursue a formal complaint and possible litigation by the Justice Department.

A report by the American Bar Association as early as 2004 noted problems in which the government was "not seen as an aggressive advocate for the returning veteran." A presidential task force chaired by former Veterans Affairs Secretary Jim Nicholson earlier this year found that agencies could do a better job of educating troops and veterans. The report did not address government enforcement of the law.

Just ask Ret. Marine Lt. Col. Steve Duarte, who won a court judgment of more than $430,000 from Agilent Technologies Inc. in March 2005 after turning to a private lawyer after losing his job. Duarte was a senior consultant when he was mobilized twice from October 2001 to April 2002 and from November 2002 to July 2003.

When Duarte returned from the second mobilization, Agilent did not reinstate his previous position but assigned him to a special project. He soon received a poor job evaluation that differed from previous positive reviews and was terminated four months later.

Duarte said he contacted the Pentagon and Labor Department, both of which turned him away. Labor Department lawyers allegedly said he didn't have a case unless he specifically heard his employer say they were terminating him for military reasons.

"I am not a lawyer, but I expected various government agencies like ESGR and the Department of Labor to help me," Duarte said in documents provided to the Senate Health, Education, Labor & Pensions Committee, which is reviewing the Labor Department's practices.

"I felt as though they were on the side of the large corporations," he said.

Eileen Lainez, a Pentagon spokeswoman, said: "We carefully consider information our members provide, and we actively work to develop solutions where needed." The Labor Department has said it has been working to better educate troops and veterans about their rights.

Sen. Edward Kennedy, D-Mass., who chairs the Senate Health Committee, said he was troubled by the findings. He said he plans legislation to hold agencies accountable by requiring them to collect and release employment data.

The Labor Department currently releases an annual report on employment complaints to Congress, but the figures do not include Pentagon data. The report, which is due to Congress on Feb. 1, has yet to be released this year.