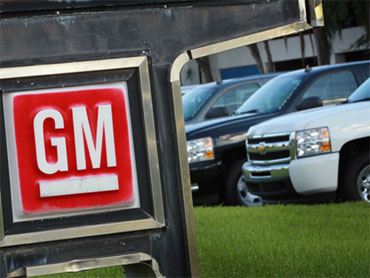 General Motors has a shot at being No. 1 again.

The resurgent automaker reported Monday that its worldwide sales last year came within 30,000 of beating Japanese rival Toyota, which took a big hit because of safety recalls.

GM is hiring, producing more and basking in a better reputation for quality. It expects to sell even more cars and trucks this year, putting it within reach of the title of biggest in the world
an honor it held for 76 years before losing it in 2008.

Regaining the global lead means a lot to workers on the assembly line in Flint, a town devastated by years of auto industry job losses. Just two years ago, they didn't know if their factory or even their company would survive.

"We're going to take Toyota on, and the people in Flint are going to be a part of that," he said. "This is the birthplace of General Motors. We kind of take it a little more seriously than maybe some other towns."

GM executives say they are focused on keeping customers happy, not on the title. They remember the company's disastrous recent history, when it sold cars at a loss just to hold on to market share.

"Satisfying and retaining our customers and delivering world-class products is pretty much the fundamental business that we're in," GM North America President Mark Reuss said Monday at the factory. "The rest of it may come, may not."

Now GM is outselling Toyota in fast-growing China, and its U.S. business is bouncing back. To overtake Toyota, it needs a sales increase of half a percentage point, about the number of Chevy Silverado pickup trucks it sells per month in the U.S.

Toyota is still wounded from recalls of more than 10 million vehicles, mainly to fix gas pedals and floor mats that could make cars speed out of control. It was the only major automaker with lower U.S. sales in December, and it's uncertain when sales will recover.

Toyota said it was not concerned with beating GM.

"Our objective is to become No. 1 with the customers," spokesman Paul Nolasco said.

Dethroning Toyota, experts say, might also help GM with marketing, even if it adds little value to the business. Their advice: GM, which has shed four of its weaker brands in recent years, should focus not on size but on making money.

"The game plan has changed enormously," said Howard Wheeldon, senior strategist with BGC Partners in London. "Its future is not to be all things to all men in every part of the world. Its concentration is now related to the ability to make profits."

And taking the lead by growing too fast can be bad. Fast growth brought global leadership but ultimately cost Toyota, which has admitted it lost focus on quality as it overtook GM for the global sales lead.

Toyota sold 8.42 million vehicles worldwide in 2010, barely ahead of GM's 8.39 million. GM made an impressive turnaround from 2009, when it was forced to take nearly $50 billion in government help and go through bankruptcy.

GM's global sales grew by a dramatic 12 percent last year, and it turned a $4.2 billion profit in the first nine months of the year. Financial results for the final three months of 2010 aren't in yet, but more profit is expected.

Along the way, GM pulled off an initial public stock offering and added 9,000 U.S. workers. GM's sales in China were so strong that they outpaced the U.S. for the first time in the company's 102-year history.

The federal government still owns about a third of the company and is gradually selling its GM stock on the open market.

So far, GM has stuck to its game plan. It has limited rebates and low-interest financing, and it's made money selling new models, such as the Chevrolet Equinox small SUV and Buick LaCrosse luxury sedan. Analysts say there's no reason to change now.

"At the end of the day you can accomplish that goal of beating Toyota without having to focus on market share," said David Whiston, an auto analyst with investment firm Morningstar. "If you focus on great product, the market share takes care of itself."

On Monday, GM recalled 750 laid-off workers for a third shift at the Flint assembly plant because of strong demand for the heavy-duty pickup trucks made there. The trucks are used mainly for construction, plowing snow and other work, and the increased demand is a sign of economic recovery. Other production increases could be coming, but GM won't go overboard by reopening closed pickup factories, Reuss said.