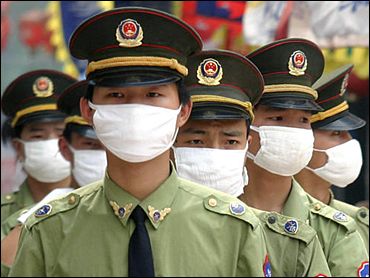 The chief of a Taiwanese hospital at the center of a new SARS outbreak resigned Monday, while Singapore told construction companies and factories to check workers for fevers daily to guard against a second wave of infections there.

In China's capital, thousands of people braved a drizzle to visit the national library, which reopened Monday in the latest sign that the world's hardest hit city is recovering.

But readers were checked for fevers, a key symptom of SARS, and urged to wear masks before being allowed to use the library's newly sterilized books. The library was shut at the height of the city's SARS crisis in April, when authorities also closed schools, cinemas and gymnasiums.

China and Hong Kong each recorded one new SARS death Monday. Together, the two account for about 80 percent of the 785 fatalities worldwide. At least 8,300 people have been sickened by severe acute respiratory syndrome since it first emerged in November.

Taiwan, the No. 3 hotspot, reported four new cases Monday, and health officials in the island's capital approved the resignation of Yangming Hospital President Wang Tai-long to accept responsibility for a new outbreak there.

Yangming has reported at least six SARS patients and 13 others with symptoms since Friday, dealing a blow to authorities who thought they had stopped the illness from spreading at hospitals — the source of 90 percent of Taiwan's infections.

But officials maintained they were bringing the outbreak under control and Taiwan still requested that the World Health Organization lift a travel warning against the island.

The Singaporean Ministry of Manpower ordered all construction sites, shipyards and factories to take workers' temperatures daily from June 16 or risk losing the right to hire low-cost foreign laborers.

Singapore has reported no new cases in almost a month, but many of the city-state's manual laborers are immigrants from China. "So long as there are SARS-affected areas in the region and the world, we cannot afford to let our guard down," the ministry said.

Canada's largest city controlled its initial wave of infections by May. A second outbreak that spread from one undiagnosed case in a hospital has been mostly brought under control, but officials have warned that some patients in critical condition could die instead of recovering.

Officials in Toronto reported the deaths of 66-year-old woman and a 63-year-old man on Sunday.

SARS outbreaks have eased in most places in recent weeks, although WHO officials have expressed continued misgivings about the quality of SARS data in mainland China, where the communist government bungled its initial response to the disease.

China's biggest airline on Monday offered free flights for life to whomever finds a cure or vaccine for SARS. China Southern Airlines said its passenger numbers have fallen 83 percent in May from a year earlier because of the flu-like illness.

Cambodian officials quarantined three Chinese men after they arrived at Phnom Penh's airport and were found to have high fevers by a newly installed thermal scanner donated by Singapore, a Health Ministry official said.

Another scanner donated by Singapore is installed at Siem Reap international airport.

Cambodia has had no confirmed SARS cases, but like many Asian countries, its tourism industry has been badly hit by the disease.