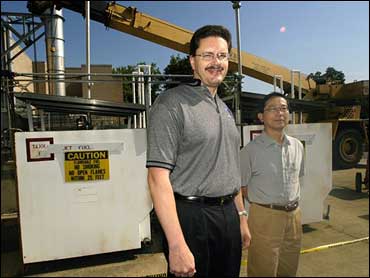 The spike in oil prices has prompted plenty of drivers to consider biodiesel-powered or hybrid cars for their daily commute, but what about that gas guzzler we use to fly across country?

Government and corporate researchers are looking into ways to power commercial jet engines with alternative fuels, although many caution that widespread use could be years or even decades away.

Scientists face myriad obstacles, including the difficulty of producing, transporting and using massive amounts of these fuels under harsh conditions such as extreme cold. And for now at least, experts say many alternative jet fuels are more expensive than traditional ones.

"It's just so much easier to develop a fuel for automobile applications than for airplane applications," said Billy Glover, director of environmental performance for Boeing Co.

"We are interested in alternative fuels because we want to make sure that there's fuel available for the future," Glover said.

Today, most commercial airplanes use a fuel similar to light kerosene. It's heavier than the gasoline in most cars but not as heavy as diesel fuel, and is designed for the particular rigors of plane travel, such as cold conditions.

One alternative researchers are studying is biodiesel, which can be made from soybeans, corn and other products, and is used in some cars and trucks today.

A big problem, though, is that biodiesel freezes at a much higher temperature than traditional fuel, which could spell trouble in the frigid air at 35,000 feet (10,500 meters).

Scientists are working on ways to keep the fuel from freezing so readily. But even if such efforts are successful, another big issue is supply. Scientists say there just isn't enough U.S. farmland to
produce the crops needed to power jetliners, in addition to feeding people.

Robert Dunn, a U.S. Department of Agriculture chemical engineer who is studying biodiesel jet fuel, said he doubts airlines will be interested until it gets cheaper.

"The main challenge right now is economics," Dunn said. "Even though the price of petroleum is going up, biodiesel is still at a disadvantage economically. It simply costs more to produce."

Glover thinks it is more likely that airplanes would fly with a mix of biodiesel and traditional fuel.

Another option, which has been considered for decades, is whether jetliners could run on hydrogen. Gerald Brown, a senior research engineer with NASA Glenn Research Center in Cleveland, Ohio, said it would require relatively little modification to run a regular jet engine using liquid hydrogen. The hard part is storing it on board.

Liquid hydrogen has to be stored at minus 424 degrees F (minus 253 C). While lighter, it also takes up far more space than regular jet fuel. Airplanes would have to be redesigned to accommodate it.

Also, since hydrogen occurs mainly in combination with other elements, such as water, it's costly and takes a great deal of energy to produce it.

Since the Hindenburg disaster of 1937, there have been worries about hydrogen's explosive qualities. But Stan Seto, an engineer with consulting firm Belcan Corp. who has researched airplane fuels, said people now have decades of experience handling such fuel, so that's not a primary worry.

Hydrogen burns cleanly, releasing water as a combustion product. But Glover said that actually could be a concern: the amount of water released by a high-flying, hydrogen-powered jet could turn it into a cloud-making machine.

"The dynamics of the upper atmosphere are pretty complex, so you wouldn't want to do that without understanding that that was actually a good thing," he said.

Another option, which is in limited use today, is to run airplanes on synthetics, made by turning coal, oil shale or natural gas into a liquid that can act like traditional jet fuel. Chi-Ming Lee, chief of the combustion branch at NASA Glenn Research Center, said rising oil prices mean synthetics could be a cheaper alternative.

Still, Lee says synthetics could be used in ultra-efficient jet engines that are under development today, potentially saving energy. Another advantage is the U.S. has large coal and natural gas reserves.

Although research into commercial jet fuel alternatives is still in the early stages, some expect quicker success in using alternative fuel for specialized aircraft.

AeroVironment Inc., based in Monrovia, California, is at work on the Global Observer unmanned surveillance aircraft that would be powered by liquid hydrogen. Spokesman Steven Gitlin said liquid hydrogen allows the aircraft to fly about four times longer than traditional jet fuel, although it is two to four times more expensive.

AeroVironment also developed — and successfully flew — a solar-powered aircraft, although the Helios Prototype crashed in later flight tests because of structural problems.

In the immediate future, the focus remains on making traditional airplanes more fuel-efficient. Boeing says its new 787 jetliner, scheduled to enter service in 2008, promises to be as fuel-efficient per person as a hybrid car traveling with two passengers.

"We try to build the most fuel-efficient airplane, so we need as little as possible fuel to meet the demand," Glover said.
By Allison Linn