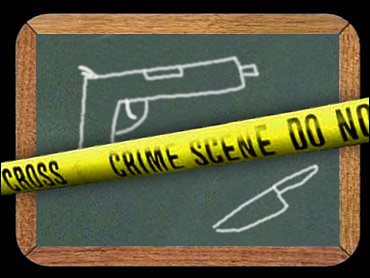 The number of U.S. teenagers skipping school for fear of getting hurt climbed over the past decade, even though violence in schools actually declined, the government said
Thursday.

The Centers for Disease Control and Prevention attributed the increase in part to a rise in schoolyard threats and lingering fear from the Columbine High School massacre in 1999 and other school shootings in the 1990s.

More than one out of every 20 high school students - 5.4 percent - skipped at least one day of school because of safety concerns in 2003, according to the CDC survey. That is up from 4.4 percent in 1993.

At the same time, CDC statistics indicate an overall drop in school violence over the past decade.

The CDC said students may be reluctant to go to school because of a "heightened sense of vulnerability" tied to the school shootings of the 1990s.

Also, one in 11 students surveyed in 2003 said they were threatened with or injured by a weapon on school property in the preceding year. That was up from about one in 14 students threatened or injured in 1993.