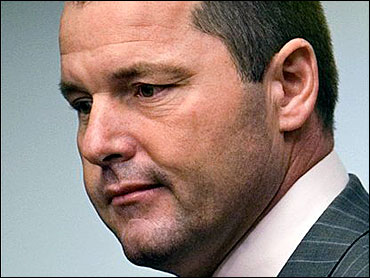 Convicted steroid distributor Kirk Radomski handed over shipping receipts to federal investigators for a package of human growth hormone that he claims he sent to Roger Clemens' home in Texas in 2002 or 2003, The Daily News reported late Tuesday night on its Web site.

Clemens, the seven-time Cy Young Award winner, is under investigation for perjury after telling Congress he never used steroids or human growth hormone. Brian McNamee, Clemens' personal trainer, told Congress that Clemens used performance-enhancing drugs and that he provided them to the 300-game winner.

The Daily News reported, according to sources with close knowledge of the investigation, that Radomski is also believed to have provided the government with new information and receipts for drug shipments to other players.

Radomski is a former New York Mets clubhouse employee whose allegations formed much of former Senate majority leader George Mitchell's report on steroid use in major league baseball. Radomski was sentenced to five years of probation in February after cooperating with government investigators.

McNamee's allegations about Clemens in the Mitchell Report led to Senate hearings with Clemens.

The Daily News reported, according to the sources, that the package Radomski sent was addressed to William Roger Clemens, in care of Brian McNamee. The Daily News' sources said McNamee did not sign for the package.

According to the sources, the timing of the shipment to Clemens' Houston home coincides roughly with the dates when Clemens' wife, Debbie, used human growth hormone in preparation for her participation in a pictorial in the Sports Illustrated swimsuit issue. They also expect the evidence to corroborate McNamee's claims that Clemens was behind his wife's use and was present when McNamee injected her just after the drugs arrived at the couple's home.

Clemens' attorney, Rusty Hardin, said he wasn't aware of the government receiving the receipts from Radomski.

"I can't imagine that there's any truth to that at all," Hardin said. "We'll find out one day Roger never received or took the stuff."

Matthew Parrella, an assistant U.S. Attorney from San Francisco, declined comment to The Daily News when contacted about the receipts.

"He found a receipt, and from what I'm told, he's turned it over to the feds," Emery said. "I don't think there's any question of its validity. It confirms the story Brian described on the occasion when he was asked to inject Debbie and Clemens presented him with the HGH."