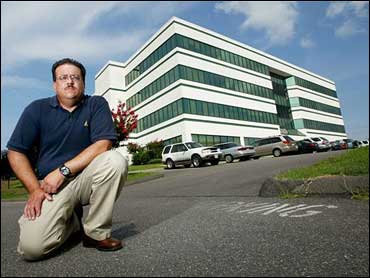 Art Munn saw his business nearly fall victim to what congressional investigators say is a growing problem: Small firms on the verge of winning federal contracts lose out to well-connected corporate giants that also claim to be small companies.

Munn, a Maryland-based contractor, competed for a Marine Corps contract last year to build radar dome covers in Bahrain. However, a large company threatened to beat his small firm out for the award. Munn protested, and after several months, the other company was ruled ineligible for the contract.

"It gets ugly," he said. "This time, everything worked like it was supposed to work, and I got the contract. But it gets frustrating. I waste a lot of time and money."

It doesn't happen that way every time, Munn said. And a report released Wednesday by Democratic congressional investigators shows it's a growing trend. At least $12 billion in contracts the government claimed it gave to small companies last year wound up instead in the coffers of large companies like Microsoft and Rolls-Royce, investigators said.

When small business contracts with large companies are excluded, the government missed for a sixth straight year a requirement that 23 percent of its $314 billion in annual contracts go to small businesses, the report said.

There were two basic problems, the investigators said: Federal agencies miscoded thousands of contracts to big companies as small business awards. Also, many other companies that started small grew large or were purchased by corporate giants but continued to get small business contracts.

"Small business is actually a little bit too big of a name for us. I tend to call us micro-business," quips Stolk, the company's CEO.

Incredibly, her firm once lost out on a contract meant for a small business to a billion-dollar corporation with 700 employees. Stolk eventually won an expensive appeal – something most little firms can't afford to pursue, Attkisson reports.

"It's just unbelievable," said Rep. Nydia Velazquez of New York, the top Democrat on the House Small Business Committee. "We have just got to start holding agencies accountable."

Velazquez is asking the Government Accountability Office and internal watchdogs for the State, Treasury, Defense and Transportation departments to investigate their contracting procedures and see if criminal activity is involved.

Under federal law, representatives of large companies that falsely claim to be small firms can be punished with 10 years in prison, $500,000 in fines, and a permanent ban from doing government business.

Generally, the government defines a small business as one with fewer than 500 employees, though that limit can vary among industries. In general, retail firms can only have maximum average annual receipts of $6.5 million.

The Small Business Administration last month issued a report saying the government gave 25.4 percent of its contract dollars in 2005 to small firms. SBA said it relied on contracting figures provided by each federal agency. The Democrats' report said the accurate figure was 21.6 percent.

When asked about corporate giants appearing in the tally, SBA spokesman Raul Cisneros said, "That's the official information that agencies give us."

The House Democrats' report, however, said the administration's tally of small business contracts in 2005 included some of the world's largest companies:

Computer giant Microsoft won eight small business contracts worth $1.5 million. Five contracts, worth $475,000, came from the Pentagon. The others came from the Drug Enforcement Administration and the Bureau of Prisons.

Rolls-Royce received $2.2 million in 63 separate contract actions. The bulk came from the Navy, which spent $2 million on 53 Rolls contracts.

ExxonMobil, with $370 billion in annual revenues in 2005, won a $63,855 contract from the Pentagon's Defense Logistics Agency and a $50,000 award from the Interior Department's Minerals Management Service. A spokesman said the company was investigating the issue but added that the Irving, Texas-based corporation has thousands of annual transactions with the government.

Tom Greer, a spokesman for Lockheed Martin, said it's a common problem. The Bethesda, Md.-based aeronautics giant has 135,000 employees and reported $37 billion in sales last year. The House panel, however, found that government agencies classified $8 million in Lockheed contracts as small business awards. Greer said the company has often had to ask federal agencies to correct records showing Lockheed as a small business.

"We don't compete with small businesses for federal contracts," he said.

John Simley, a spokesman for Wal-Mart, said it's likely the entry was the result of a clerical error by the government.

"We've been called a lot of things," he said, "but 'a small business' is not one of them."

Velazquez said she plans to write roughly 2,500 big companies, asking them to remove their names from a government list of approved small business firms, and also will seek legislation to punish agencies that cheat.

House Republicans said much of the controversy can be attributed to small businesses that have prospered under the Bush administration, either adding enough employees to become a large company or being acquired by large businesses.

"Should the firm be penalized for success?" asked Rich Carter, a GOP spokesman for the House Small Business Committee. "Should the agency not be given credit for taking a risk by placing their initial confidence in this small business to perform this type of work? Maybe (Democrats) believe this company should have never received the contract in the first place to satisfy some accounting standard."