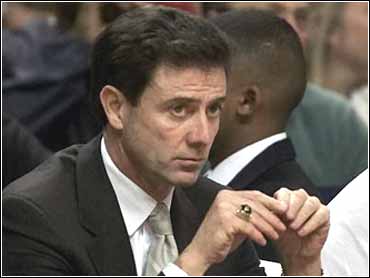 "I think it could be very soon," Pitino, who resigned earlier this week as coach of the Boston Celtics, told the Globe on Thursday from Florida. "They've made it clear that they want me. I just have to go out there and check out the situation myself. It will all be decided in the next two weeks."

Pitino said that a possible snag in the negotiations could be the severity of sanctions recently imposed by the NCAA against UNLV for allowing a booster to give money to Lamar Odom when he was being recruited by the university.

The sanctions, which led to the firing of Bill Bayno last month and the promotion of Max Good, will keep UNLV out of the NCAA tournament this year and take away two scholarships for each of the next two years. The school also can't take part in outside tournaments next season.

"I just want to see what shape the program is in, look at the players and see if the sanctions will make it hard for me to win right away," Pitino said. "The rest of it will take care of itself."

The Boston Herald also said Pitino is making moves toward the UNLV job.

"I'll be making a trip out there (next week) to look at the facilities, and to talk to their athletic director and school president," Pitino told the Herald from his home in Miami. "But in terms of whether or not I'm going to take that job, it's still too early in the game."

Pitino quit Monday as Celtics coach after 3 1/2 years following a 112-86 loss to the Heat in Miami.

Good, whose team has won seven straight games, got up early Thursday to read front page headlines that Pitino was coming to Las Vegas to discuss taking his place with UNLV officials.

It didn't help that Pitino himself called Good a day earlier to say he wasn't aware that the job already was taken.

"He acted like he didn't know the job was filled," Good said. "I've got to feel he knew whether it was open or not. He was just splitting hairs."

Good said he thought he would be given until the end of the season before the school decided on a coach.