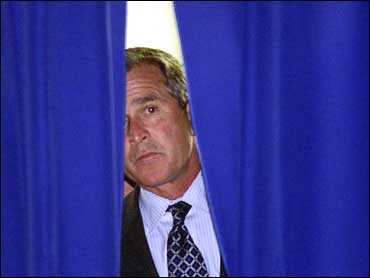 This column was written by Aziz Huq.

It's time to do something about executive privilege.

Having stretched the Constitution to the snapping point, the White House now brandishes "executive privilege" talismanlike, to ward off discovery of its wrongdoing. White House counsel Fred Fielding not only refuses to provide specific evidence to Congressional committees investigating the firing of U.S. Attorneys but makes the unprecedented claim that the President can block former advisers from appearing before Congress. Echoing an argument last heard in the infamous torture memo of August 2002, the President also claims unfettered control over federal criminal prosecutions — hence barring one way of challenging Fielding's startling arguments.

This obfuscation, though, is not merely an extension of the administration's pet theory of monarchical executive power; it is also a calculated strategy to avoid accountability. The Administration knows that federal courts have long been reluctant to force secrets from the executive, and is thus willing to fight the House Judiciary Committee's contempt citations against Joshua Bolten and Harriet Miers. By playing hardball until the clock runs out on the Bush II era, the White House hopes to eliminate accountability for warrantless wiretapping, partisan manipulation of the Justice Department — and even torture. Worse, it sends the message to future Presidents that they can do the same.

The case for limiting executive privilege by a clear law does not rest on White House shenanigans alone. In fact, executive privilege is a vague concept that has metastasized in a short half-century. To prevent it from undermining democratic government, reform is urgently needed.

Start with the Constitution, which makes no mention of executive privilege. To the contrary, only Article I — listing Congress's powers — even mentions secrecy. Article II, describing the presidency, does not. It is not surprising that the branch of government worst structured for keeping secrets receives the sole constitutional power to do so, for the Constitution embodies a presumption toward disclosure. It mandates elections, which are mere farce without information about what a government does. And by constraining government power to muzzle criticism, the First Amendment deepens the constitutional tilt toward transparency. Nevertheless, Presidents since George Washington have exploited the absence of clear constitutional rules to withhold information. With the exponential growth of government after the New Deal and World War II, such inchoate and ill-defined claims suddenly became a potent weapon in the battle over separation of powers.

By the time of Bush II, the President's personal right to keep conversations with advisers confidential had morphed into a bottomless well of secrecy obscuring not only the Oval Office but the entire White House. It extended to cover advisers like Miers and their conversations with people outside the White House. It hid from Congress the August 6, 2001, President's Daily Brief, which revealed that Bush had been warned about al Qaeda's determination to attack. And of course it sheltered Dick Cheney, who made the startling argument that the office of the Vice President entitles him to keep secret not only conversations with Administration officials but also with private citizens.

The problem will not vanish in 2009. The executive branch has the greatest capacity to create secrets, thanks to its enormous intelligence apparatus. The growing risk of abuse, and the greater capacity for corrosive secrets, means we must find new ways to constrain the Article II leviathan. Moreover, arguments defending the privilege are much weaker than supposed. Foremost among these is what Bush calls the need for "crisp decision-making." Without secrecy, he implies, Presidents do not get candid advice.

There are three reasons this canard ought not to fend off a new law. First, executive privilege is never absolute: The Supreme Court in United States v. Nixon ordered the disclosure of intimate conversations between a President and his advisers. Second, claims for executive privilege are now untethered from any decision-making process that involves the President; they have been extended, viruslike, to the sprawling White House policy-making staff. Third, is it so bad for officials to feel the eyes of the people on their back? After all, they have a fidelity not only to the person who happens to sit in the Oval Office but also, via the Constitution, to the people. Why should officials ever forget their second — and arguably greater — obligation?

By contrast, the risk that Congress will abuse its investigative powers is smaller than generally imagined. Congressional overreaching is mitigated because the President's party is always on hand in Congress to publicize and condemn partisan investigations. Congressional misuse of power, unlike its executive counterpart, is always open to public criticism and condemnation.

An effective law on executive privilege would define and limit it. A law would clarify not only which communications are covered but when Congress can overcome the privilege: Allegations of criminal wrongdoing or violations of law would suffice to dissolve any absolute claim of nondisclosure. The law could then create mechanisms for threshold disclosure to a limited pool of legislators and staff. For disputes that persist, it would expedite judicial appeal. Courts would be obligated to resolve cases of constitutional moment quickly, to stop the clock from being run out. And clear sanctions would be imposed on the privilege's abuse.

The struggle over testimony today is but a fraction of a larger fight. The White House's effort to cloak its dismal legacy should not obscure the importance of the larger battle over the fundamental balance of constitutional power.
By Aziz Huq
Reprinted with permission from The Nation