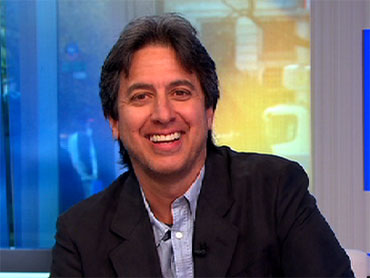 For nine seasons America got to know, and love, Ray Romano as the title character on the CBS show "Everybody Loves Raymond." These days, he's found a new home starring in the hit TNT series "Men of a Certain Age."

On the critically-acclaimed series, Romano plays Joe, a divorced, slightly neurotic father of two who runs a party store and recently overcame a gambling problem. After some early missteps, he is getting more into the swing of the dating scene and in season two, has decided to rekindle his dream of becoming a professional golfer, training for a spot on the senior tour.

Romano is joined by Scott Bakula, of "Quantum Leap" and "Star Trek: Enterprise" fame, and Andre Braugher, of "Homicide: Life on the Street" and "Salem's Lot."

On "The Early Show," Romano said he's continuing to write what he knows.

"That's what's worked for me in my career," he said. "This is what I know now, you know, the little aches and pains of midlife, physically and spiritually. ... I was kind of going through this midlife 'What do I do now?'
And so was my buddy, Mike Royce, who I write with. We said, let's make money on it."

Romano said he's discovered a surprising thing from TNT about the show. They say, Romano said, the show has a bigger female audience than male.

"This is what TNT tells me -- sometimes they just tell me stuff to shut me up -- but they said that women are -- we have a bigger woman (audience)."

Smith offered, "I think maybe you guys are actually sex symbols. I think it's a magnet, you're magnets."

Romano said it's probably more about women wanting to learn more about what's going on inside a guy's head.

For more with Romano on the second season of "Men of a Certain Age," click on the video below.

Editor's Note: The putting green used in the segment was provided by GolfManhattan.