Michael McCrary walked into the interview area, plopped himself on a chair and said what virtually everyone associated with the Baltimore Ravens was thinking.

For the first time since September, McCrary and the Ravens celebrated a victory. Rod Woodson returned an interception 18 yards for a touchdown and McCrary had four sacks as Baltimore ended its four-game losing streak by beating the Oakland Raiders 13-10 Sunday.

After allowing 45 points in an embarrassing loss to Jacksonville last week, the Baltimore defense redeemed itself. And coach Ted Marchibroda, in the final season of a three-year contract, received at least a one-week reprieve from questions concerning his shaky job situation.

"I don't see any pressure or feel any pressure. You prepare the same way every week," Marchibroda said afterward.

Yet the relieved look in his face indicated Marchibroda last week obviously had a lot more on his mind than game plans and depth charts.

So did the Ravens (3-6), who held a players-only meeting in the middle of the week to discuss the situation.

"Everybody loves Ted," McCrary said. "But we can't control what happens to him. We can't even think about it. It's up to us as players to win. That's what we can control."

The Raiders, who had won five consecutive expected their good fortune to continue with quarterback Jeff George back in the lineup for the first time since October. But George reinjured his groin and left after the first series, and this time backup Donald Hollas could not produce a victory.

Hollas, who won three in a row since taking over as the starter, went 17-for-26 for 249 yards. But he threw two interceptions, including one by Baltimore rookie Duane Starks in the end zone on the game's final play.

It was the first loss for Oakland (6-3) since Sept. 20. The Raiders hurt themselves by being penalized 14 times for 98 yards.

"You're not going to win with 14 penalties," coach Jon Gruden said. "When you have five or six of them on the first play of a series -- not good. When you rough the passer (and) prolong scoring drives -- not good. You cannot have that many penalties and expect to win in this league."

Baltimore got two field goals from Matt Stover in winning for the first time since a 31-24 defeat of Cincinnati Sept. 27. The Ravens' slide had put Marchibroda's job security in serious doubt, and there was reason to believe he wouldn't get the chance to coach into next week if Baltimore lost this one.

The Ravens and Marchiabroda survived, but it sure wasn't easy.

Oakland made it 10-10 with 13:59 left on a 5-yard touchdown pass from Hollas to Rickey Dudley. The drive featured a 27-yard pass to Dudley and a 23-yarder to Tim Brown on a third-and-7 play from the Baltimore 27.

But the Ravens responded with a 62-yard march that produced Stover's second 30-yard field goal of the game with 9:14 remaining. Jim Harbaugh, who attempted only one pass in the third quarter, was 3-for-3 on the drive.

Harbaugh, in his first victory as a Baltimore starter, went 10-for-17 for 102 yards. Priest Holmes ran 27 times for 99 yards, easing some of the strain on the Ravens' maligned defense.

Baltimore led 10-3 at halftime. At that point the Raiders had been called for 10 penalties and were without George and center Barret Robbins, who was ejected for kicking Ravens' safety Stevon Moore.

George's first pass was a 35-yard dart to James Jett, but the nine-year veteran went 1-for-3 in his ill-fated return.

Hollas' first throw, in contrast, was a disaster. Woodson intercepted the hurried pass at the Oakland 18 and went untouched into the end zone for a 7-0 lead.

"You get thrown into the fire and it certainly didn't help that I went in there, made a bonehead play and threw an interception for a touchdown," Hollas said. 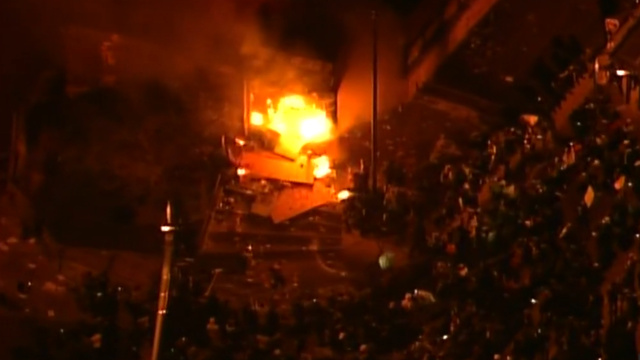