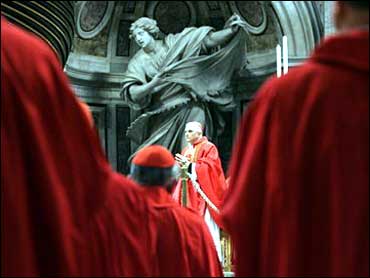 "We can be sure our beloved pope is standing today at the window of the father's house, that he sees us and blesses us."

"Today we bury his remains in the earth as a seed of immortality. Our hearts are full of sadness, yet at the same time of joyful hope and profound gratitude."

"It is true that the Muslim world is not totally mistaken when it reproaches the West of Christian tradition of moral decadence and the manipulation of human life ... Islam has also had moments of great splendor and decadence in the course of its history."

"That the Jews are connected with God in a special way and that God does not allow that bond to fail is entirely obvious. We wait for the instant in which Israel will say yes to Christ, but we know that it has a special mission in history now ... which is significant for the world."

—from Ratzinger's book, "God and the World," published October 2000, as reported by National Catholic Reporter

"Our Christian conviction is that Christ is also the messiah of Israel. Certainly it is in the hands of God how and when the unification of Jews and Christians into the people of God will take place."

—from "God and the World," published October 2000, as reported by National Catholic Reporter

"Having a clear faith, based on the creed of the church, is often labeled today as a fundamentalism... Whereas relativism, which is letting oneself be tossed and 'swept along by every wind of teaching,' looks like the only attitude acceptable to today's standards.

—from a homily Ratzinger delivered at the Mass hours before the beginning of the conclave that would elect him pope, April 18, 2005

"The fact that the church is convinced of not having the right to confer priestly ordination on women is now considered by some as irreconcilable with the European Constitution."

"In the Church, priests also are sinners. But I am personally convinced that the constant presence in the press of the sins of Catholic priests, especially in the United States, is a planned campaign, as the percentage of these offenses among priests is not higher than in other categories, and perhaps it is even lower.

"In the United States, there is constant news on this topic, but less than 1 percent of priests are guilty of acts of this type. The constant presence of these news items does not correspond to the objectivity of the information nor to the statistical objectivity of the facts."

"I think the essential point is a weakness of faith."

—from an interview with EWTN news director Raymond Arroyo in August 2003 as reported by Zenit.org, Aug. 24, 2003

"We have such difficulty understanding this renunciation today because the relationship to marriage and children has clearly shifted. To have to die without children was once synonymous with a useless life: the echoes of my own life die away, and I am completely dead. If I have children, then I continue to live in them; it's a sort of immortality through posterity...

"The renunciation of marriage and family is thus to be understood in terms of this vision: I renounce what, humanly speaking, is not only the most normal but also the most important thing. I forego bringing forth further life on the tree of life, and I live in the faith that my land is really God — and so I make it easier for others, also, to believe that there is a kingdom of heaven. I bear witness to Jesus Christ, to the gospel, not only with words, but also with this specific mode of existence, and I place my life in this form at his disposal."

"... Celibacy is not a matter of compulsion. Someone is accepted as a priest only when he does it of his own accord."

—both from "Salt of the Earth: Christianity and the Catholic Church at the end of the Millennium: An interview with Peter Seewald," by Ratzinger, San Francisco: Ignatius Press, 1997

"Although the particular inclination of the homosexual person is not a sin, it is a more or less strong tendency ordered to an intrinsic moral evil, and thus the inclination itself must be seen as an objective disorder."

"It is deplorable that homosexual persons have been and are the object of violent malice in speech or in action. Such treatment deserves condemnation from the church's pastors wherever it occurs... The intrinsic dignity of each person must always be respected in work, in action and in law."

—both from Ratzinger's "Letter to the Bishops of the Catholic Church on the Pastoral Care of Homosexual Persons," 1986, as reported by National Catholic Reporter

"...Men and women were created to be jointly the guarantee of the future of the humanity — not only a physical guarantee, but also a moral one."

"Above all, we must have great respect for these people who also suffer and who want to find their own way of correct living. On the other hand, to create a legal form of a kind of homosexual marriage, in reality, does not help these people."