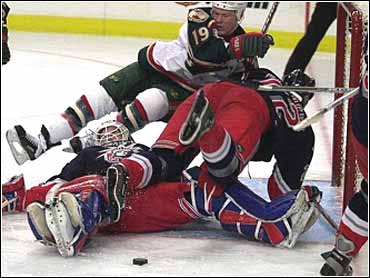 The New York Rangers' struggles the past year have centered around Mike Richter's injured left knee. It finally felt good Sunday night and the Rangers won for the first time in nearly a month.

Richter made 30 saves and Adam Graves scored his 300th career goal as the Rangers snapped a nine-game winless streak with a 4-2 victory over the Minnesota Wild.

"He's the reason we won, basically," said Brian Leetch, who scored twice in the first period. "The saves that he did make, you can say each one of them would have been goals. It let us turn the whole tide of the game, It kept us in the lead and made them continue to have to come at us instead of playing that trap."

"I can't remember how to feel after a win," coach Ron Low said. "We needed it pretty badly."

The win gave Richter 265 in his career - one short of Ed Giacomin's team record. Richter didn't travel to Boston for Saturday's uninspired 4-1 loss to the Bruins, after he had fluid drained earlier in the week from his surgically rebuilt left knee.

"The difference for us was we played hard with emotion," said Richter, 13-17-1 with an uncharacteristically high 3.42 goals-against average this season. "We needed that fourth goal just to give us some distance, and we got it. It was a well-deserved win.">

The 34-year-old goalie tore a knee ligament during last year's All-Star festivities and the Rangers went 6-18-5 after that and missed the playoffs for the third straight season.

New York improved to 17-24-2-1 but is mired in 11th place in the Eastern Conference. With 37 points, the Rangers are seven behind the teams that currently sit at the postseason cutoff.

"The atmosphere has been very difficult to play through here," Richter said. "You have to keep fighting. You come into the locker room and the feeling is so intensely down. The guys want to win but the frustration level is enormous."

Richter was terrific throughout, but shined in the closing minutes of the first period with Minnesota on a 5-on-3 advantage. Richter made four acrobatic saves during the first portion of the power play and seven total by the time the 1 minute, 35-second advantage expired early in the second period.

"I thought Ricky was great," Low said. "On the 5-on-3 he saved us. He made about five saves there that were awesome. The team fed off that after that. That's as good as I've seen in a long time from him, he was fantastic."

Aaron Gavey brought the Wild within 3-2, at 6:35 of the third 17 seconds after he left the penalty box at the end of New York's second failed 5-on-3 power play. Sergei Krivokrasov scored his third goal of the season in the first period, briefly pulling Minnesota into a 1-1 tie.

"We played well," Wild coach Jacques Lemaire said. "They knew they had to win this game. We were in the game all the way to the end, up until the last goal."

The Rangers have only one goal in their last 52 power-play chances going back to their last victory and have yielded four short-handed goals in the span. During a second-period two-man advantage, New York was foiled three times by shots hitting the crossbar.

"We must have hit a minimum of six goal posts or crossbars, it was ridiculous," Low said. "And all of them were labeled shots but they were just too high or outside."

The Rangers showed more of the spirited, hard-hitting play that they exhibited in a tie and two losses leading up to the Boston game. New York slipped back into an uninterested mode against the Bruins, something the Rangers must avoid if they are to return to the playoffs.

Leetch made it 1-0 just 3:53 in, carrying the puck into the Wild zone and beating goalie Manny Fernandez with a long wrist shot. After Krivokrasov tied it at 8:07, Leetch answered 29 seconds later.