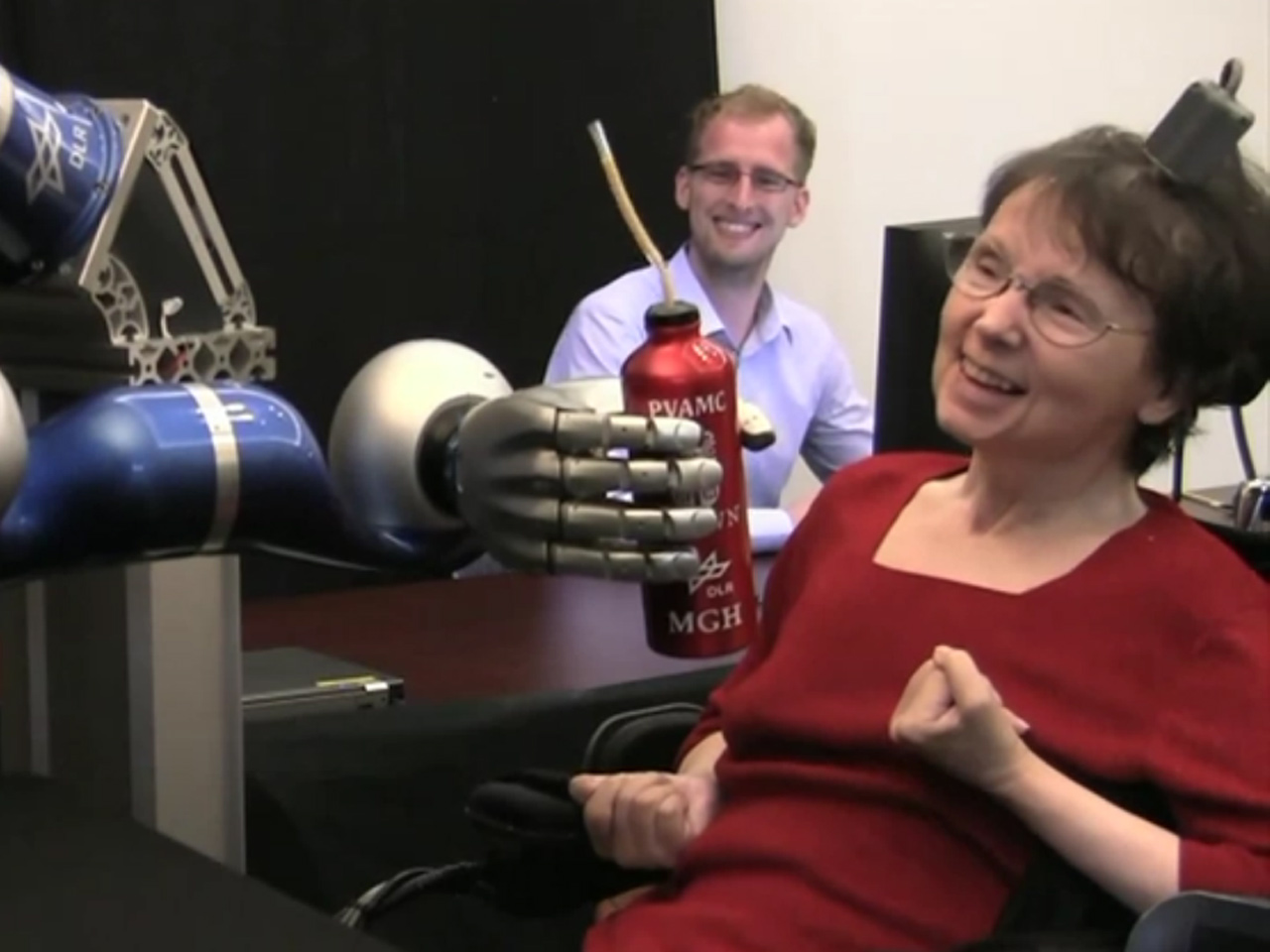 (CBS News) Robots have lent two quadriplegic people who are unable to move or speak a helping hand.

With the assistance of a mechanical arm - which they controlled with their mind - two subjects that suffered strokes were able to get a robot to reach out and squeeze a ball in front of them. Cathy Hutchinson of East Taunton, Mass., who was successful at this task 46 percent of the time, was then asked to tell an arm to bring a bottle of coffee with a straw to her lips. She was able to complete the task on four out of six tries.

"The smile on her face ... was just a wonderful thing to see," said Dr. Leigh Hochberg, a researcher with the Providence VA, Brown and Massachusetts General Hospital, told Nature News. The study is published in the March 16 issue of Nature.

The report is another case of where brain power has been used to tell robotic devices how to assist people. In this study, tiny recording chips were implanted into the subject's brains, which helped record the neuronal signals that told things to move.The study also described a man named Bob who suffered a stroke in 2006, and was able to complete the ball task 62 percent of the time.

The two are just the first of hopefully 15 people who will participate in this study. So far, seven people have been implanted with the devices and show no side effects.

It's also promising because Hutchinson, who has been paralyzed for 15 years, still had the brain function that is required to signal one's muscles to move.

Previously, a robotic arm allowed a man to give his girlfriend a high five for the first time, HealthPopreported. He said learning how the use the device was like learning how to drive a car with manual transmission. Eventually, he would like to hug his 8-year-old daughter.

While the technology is still rather cumbersome - the subjects have wires protruding from their heads - and expensive, in the future scientists want to find a way to get rid of the external brain hardware and find a way to transmit those movement "messages" directly into unaffected muscles. Typically, the injury in quadriplegic people occurs in the spinal chord, but the other limbs are fine.

This particular study focused more on seeing if the process of  implanting the chip is safe, rather than trying to see if these robotic devices could have every day application because of these issues.

Watch a video of Hutchinson working the robot device below: