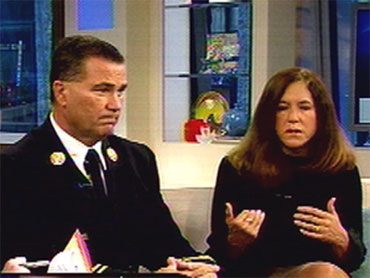 The Islamic center and prayer room planned for a site two blocks from Ground Zero has caused a firestorm of controversy - and family members of those killed on 9/11 are anything but immune.

On "The Early Show on Saturday Morning" on Sept. 11, 2010, two such family members explained why the feel as they do. One is bitterly opposed, the other a supporter.

Riches said Jimmy "was working that day. He was a narcotics cop for eight years, switched over to the Fire Department. And he went into that building that day, you know, looking to help everybody, whether they be Muslim, Catholic religion, black or white, and that's what he was about, helping people, and he died a hero that day. I'm proud of what he did, and we were lucky to recover his body in March of 2002, and me and my three other firefighter sons, who followed also in his footsteps, because he was their hero before 9/11 and he was their hero after 9/11, we carried his body out of there and we were able to bury him, unlike (those) who have never found anything."

The healing process, Riches told co-anchor Rebecca Jarvis, has "been very difficult. People talk, 'Is there closure?' There's never any closure. My son's not gonna come walking back in that room. We always miss him, we miss him on all the holidays. You see people saying, like (President) Obama and the Imam (Faisal Abdul Rauf, who's spearheading the plan to build the Islamic center) -- nobody knows what it is like to lose a child, to have him murdered, until you're in those shoes."

O'Connor told Jarvis she "knew God from the time I was a child. I'm not a religious person. But, you know, we only have one life. And, you know, Vanessa went to work -- I mean, that's all she did that morning. She was not heroic. She went to work, she went to work early. And the only thing she ever wanted in life was that child. That was it. That was the only thing I really knew was a solid goal. And for me, I can't discount the lives of two boys who were devastated by the loss of their sister. And I just -- you walk away, you walk away. And I have some confidence that, in some way, when all is said and done, we will have lived on this earth, you know, in relatively the same quantity of years."

Riches says he's against the Islamic center. "I am very upset, you know. I think Obama was lecturing to us yesterday, talking down to us like, you know, like everybody is a radical and a racist and a bigot.

Editor's note: Mr. Obama said yesterday, "This country stands for the proposition that all men and women are created equal, that they have certain inalienable rights," he said. "One of those inalienable rights is to practice their religion freely. And what that means is that if you could build a church on a site, you could build a synagogue on a site, if you could build a Hindu temple on a site, then you should be able to build a mosque on a site." He added that while "I recognize the extraordinary sensitivities around 9/11," it is important to remember that "we are not at war against Islam." "We're at war against terrorist organizations that have distorted Islam or falsely used the banner of Islam to engage in their destructive acts," he said. "And we've got to be clear about that. We've got to be clear about that because...if we're going to successfully reduce the terrorist threat, then we need all the allies we can get."

"I have Muslim friends," Riches continued. "This is not about religious freedom. It's not about constitutional rights. We've not asked them to close any mosques. We strictly asked - it's not anti-Muslim; it's anti-location. Sit down with us, talk to us, the iman - they're supposed to be bridge-builders. (New York) Mayor (Mike) Bloomberg - they've thrown up nothing but roadblocks. Let's sit down in a democratic way. Talk it over with the families and the other people. Maybe they'll move it. They have every right to build there. We can't stop them, but we just hope they'll be sensitive to us, because 25,000 body parts will be brought to the (9/11) museum, and it's a cemetery."

O'Connor said she certainly understand that point of view. "No one wants to be in this position, sitting next to not only a person I admire, but a person in a career that I really do believe is special and heroic," she observed. "Three-hundred-forty-three (firefighters killed at Ground Zero) is a number I will never get out of my head. At the same time, you know, we live in a land that is about -- everyone has a right to religious practice, and there can't be any address where it's not OK. I think about, you know, everything hurts us as 9/11 family members. You know, this morning, those gothic beams sticking up out of a pile where I left my kid pains me no end. I'm glad you guys have the freedom of speech to do it. I would never say, 'Don't do it.' I think that's one issue where many of us would agree. That hurts. It hurts when, you know, at any given point in time, to make a political point, those towers are coming down again. You know, I think, down the road, ten years, 20 years, if we continue these kinds of discussions, Muslim-American people are gonna to be yet another group of people that we say, 'You're not valued.'"