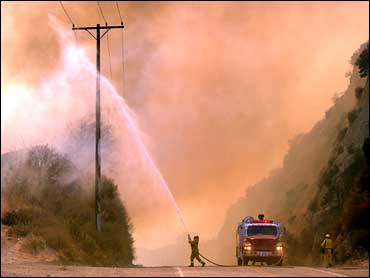 Firefighters managed to keep a stubborn wildfire in Los Angeles County away from hundreds of canyon homes, while their colleagues made progress against other blazes that have burned more than 40,000 acres of California brush and forest.

Nearly 1,600 homes have been evacuated since the fire began Saturday in northern Los Angeles County. It had spread across about 6,000 acres by Monday evening and was 45 percent contained by firefighters using helicopters, bulldozers and hand crews working in 90-degree heat.

The blaze was ignited when a red-tailed hawk flew into a power line and its flaming body fell into brush, reports CBS News Correspondent Vince Gonzalez. Nearly 2,000 residents had to evacuate over the weekend as a dangerous combination of drought, wind and high temperatures fueled the fire.

Residents were allowed to return to homes in the Sand Canyon and Fair Oaks Ranch communities but were kept out of about 350 homes in Placerita Canyon.

In Alaska, firefighters were having a more difficult time battling a fire on the outskirts of Fairbanks.

About 150 people were told to evacuate Monday from the Haystack subdivision north of the city.

"The western perimeter of the fire began to move and we felt that it was necessary to evacuate about 80 residences," Berg said.

So far this year, 3.6 million acres have burned in Alaska.

"This is a very intense fire season that we're having up here in Alaska. It's currently ranked third in the overall fire seasons," Berg said.

However, most of the state's 107 fires are in Alaska's remote and unpopulated forests, and many are being allowed to burn.

The Los Angeles County fire was one of several burning across more than 40,000 acres of California, from eastern San Diego County to Yosemite National Park. The overall cost of fighting the four largest fires was estimated at $20 million.

One of the largest blazes, 90 miles east of Los Angeles in Riverside County, has destroyed four mobile homes, 14 outbuildings and more than a dozen vehicles. The 3,667-acre fire was expected to be fully contained by Tuesday morning.

That fire was started by a target shooter, who was given a citation and may have to pay costs of fighting the fire, said Jim Boano, a spokesman for the California Department of Forestry.

"We made a defensive stand at the structures and were fortunate enough to beat the fire," he said.

Elsewhere, firefighters made steady progress against a fire about 45 miles north of Los Angeles that has burned more than 17,000 acres since it started July 12. The fire, which was about 90 percent contained Monday evening, has destroyed three homes.

In Yosemite National Park, a lightning-sparked wildfire that has closed a number of trails was being allowed to grow on one front but was otherwise mostly contained, park officials said. The blaze has burned across more than 3,800 acres.

In Nevada, officials said a ferocious 7,600-acre wildland fire that destroyed 15 homes in Carson City was nearly contained and had been traced to an illegal campfire. Brisk winds sent the flames to within one-half mile of the governor's mansion.