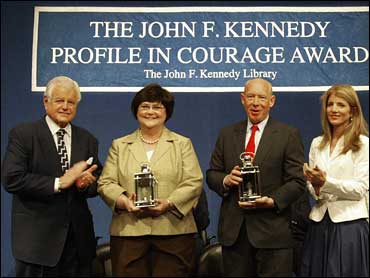 I spoke with Caroline Kennedy this morning about the annual awards that are bestowed in memory of her father.

Both community leaders were slammed by Hurricane Katrina. Mayor White opened the doors of his city to some 200,000 evacuees. He told me today even with the many problems they presented it was the right thing to do.

Being a good neighbor is what he called it. Even now, there are still more than 100,000 folks who have decided to stay and make Houston their home.

More than 90 percent of the homes and businesses in St. Bernard Parish were inundated by water from the hurricane. Doris Votier quickly learned that the promises the federal government was making were never going to come true.

Had she not decided to bypass FEMA her schools might still be closed. Courage indeed.


Harry's daily commentary can be heard on many CBS Radio News affiliates across the country.
By Harry Smith