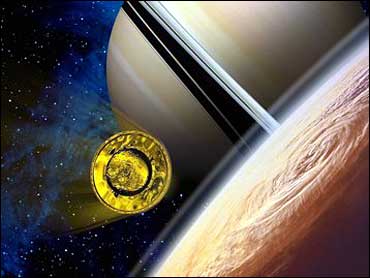 A European space probe powered up its dormant systems Friday and powered into the atmosphere of Saturn's moon Titan on a mission to explore its mysterious surface and hazy atmosphere — which could hold clues to how life arose on Earth.

The European Space Agency's Huygens probe successfully turned itself back on, a key step in the mission, officials at mission control in Darmstadt said.

"It has entered the atmosphere and entered it correctly," Roberto Lo Verda, a spokesman for the agency said. "We know the batteries are switched on, the parachute has deployed and it has slowed down sufficiently."

The probe was spun off from the international Cassini mother ship on Christmas Eve and began its free-fall toward the moon's surface, its systems powered down. It was to spring to life just before hitting the upper atmosphere of Titan — the only moon other than Earth's ever to be explored by spacecraft.

The probe will begin examining the gases in the atmosphere. It is also equipped with instruments to study Titan's surface upon landing, which would be the first of a spacecraft on the moon of a planet other than Earth.

"I expect it to be a very interesting and scientifically challenging moon to visit," Alan Smith, deputy head of operations at ESA told The Associated Press. "The Huygens mission will be the first one to get there, that's why it's so exciting."

Mission controllers waited to hear back from the spacecraft, whose transmissions take 67 minutes to reach Earth.

"Everything in the control room is good so far," said David Southwood, ESA's director of science. "We should know in a couple of hours where we are."

Named after Titan's discoverer, the 17th-century Dutch astronomer Christiaan Huygens, the probe is shaped like a wok and covered with a heat shield so that it that can survive the intense heat it will face upon entry. Timers inside the 705-pound probe will awaken it just before it enters Titan's atmosphere

Huygens will then deploy a series of parachutes to slow its descent to the moon's reddish surface, expected to take about 2½ hours. As it descends, the probe will shed its heat shield and deploy its special camera and instruments to begin collecting information on wind speeds and the makeup of Titan's atmosphere. This data will then be transmitted back to Cassini, which will relay it to NASA's Deep Space Network in California and on to ESA controllers in Darmstadt, Germany.

Titan is the only moon in the solar system known to have a significant atmosphere. Rich in nitrogen and containing about 6 percent methane, the Titanic atmosphere is 1½ times thicker than Earth's.

Alphonso Diaz, science administrator for NASA, said Titan may offer hints about the conditions under which life first arose on Earth.

"Titan is a time machine," Diaz said. "It will provide us the opportunity to look at conditions that may well have existed on earth in the beginning. It may have preserved in a deep freeze many chemical compounds that set the stage for life on earth."

Part of a $3.3 billion international mission to study the Saturn system, Huygens is also equipped with instruments to study Titan's surface upon landing. Scientists don't know exactly what it will hit when it lands at about 20 mph.

"It could land on something solid ... it could land in liquid methane, which is what they think a lot of the black seas on Titan are," Smith said. "Because the temperature is so cold and the pressure is so high, gases like ethane and methane exist in liquid form, so it could well land in a sea of methane."

The probe floats and should survive such a landing, despite the temperature of minus 292 degrees Fahrenheit. One hazard would be landing on a solid slope in a position that doesn't permit a strong signal back to Cassini.

Engineers at ESA are counting on the probe to have at least three minutes to transmit information and images from Titan's surface before its battery runs out or Cassini gets out of range.

The Cassini-Huygens mission, a project of NASA, ESA and the Italian space agency, was launched on Oct. 15, 1997, from Cape Canaveral, Fla., to study Saturn, its spectacular rings and many moons.

During the nearly seven years Cassini took to reach the ringed planet, the attached probe was powered through an umbilical cable and awakened from sleep mode every six months for tests.