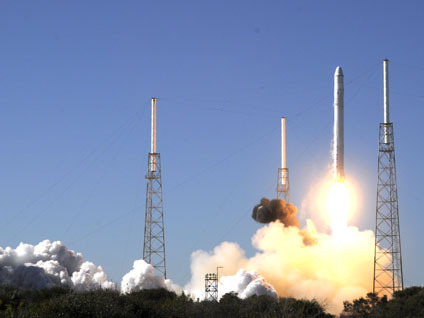 Along with testing the two-stage Falcon 9 rocket, making only its second flight after a maiden launch in June, Space Exploration Technologies Corp. managers and engineers looked forward to automated maneuvers by the Dragon cargo craft before a guided re-entry and a parachute-assisted splashdown in the Pacific Ocean off the coast of Mexico.

Running a day late because of work to cut away a cracked section of the rocket's second-stage engine nozzle, the booster's nine first stage Merlin engines roared to life at 10:43 a.m. EST and quickly throttled up to full thrust. After a final round of lightning-quick computer checks, hold down clamps released and the 157-foot-tall rocket majestically climbed away from launch complex 40 at the Cape Canaveral Air Force Station.

The early moments of the flight appeared normal as the white booster streaked away to the east through a cloudless blue sky trailing a brilliant jet of flame and a billowing cloud of exhaust.

The second stage appeared to fire normally, shutting down nine minutes after liftoff. About 35 seconds later, the Dragon cargo craft could be seen in another "rocket cam" video feed separating from the second stage, released into a roughly circular 186-mile-high orbit tilted 34 degrees to the equator.

The flight plan called for a series of automated maneuvers to mimic critical phases of an approach to the International Space Station. The spacecraft subsequently parachuted without problem into the Pacific Ocean, 500 miles off the Mexican coast.

The launching was the first of three financed by NASA under its Commercial Orbital Transportation Services -- COTS -- program, an initiative intended to encourage development of private sector rockets to deliver cargo to the International Space Station after the space shuttle is retired next year.

SpaceX has a $1.6 billion Commercial Resupply Services contract with NASA to provide 12 cargo flights to the station for delivery of more than 44,000 pounds of equipment and supplies. The contract may be expanded to cover additional flights, boosting its value to some $3.1 billion.

Three test flights are planned under a separate contract valued at up to $278 million. SpaceX has spent more than $600 million of its own money developing the Falcon family of rockets, the Dragon spacecraft and other components.

SpaceX had hoped to launch the Falcon 9/COTS-1 mission Tuesday, but the flight was delayed 24 hours to fix a problem with two cracks in the outermost section of a rocket nozzle extension used by the second stage engine.

The cracks were caused by "fluttering" produced by a nitrogen purge venting onto the thin nozzle. The nozzle extension is not needed for the test flight and engineers simply cut the damaged section away and installed a diffuser on the vent line to prevent additional problems.

An initial launch attempt Wednesday was called off two minutes and 50 seconds before a planned 9:06 a.m. liftoff because of a "false abort" indication in ground system telemetry. The problem was corrected and the countdown was recycled for 10:43 a.m.