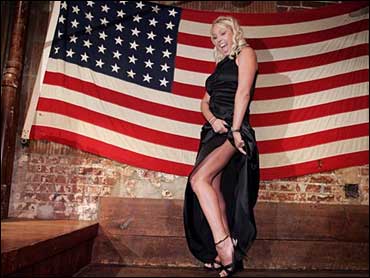 President Bush was among more than 5,000 people at a Republican fundraiser in Washington Wednesday night that took in more than $23 million for congressional campaigns.

But, explains CBS News White House Correspondent Bill Plante, it was another guest who got all the attention she hoped for, and a lot more than her GOP hosts wanted.

Mary Carey is an actress in "X"-rated films and a would-be politician. She ran for governor of California two years ago and says she plans to run for lieutenant governor there in 2006.

"I've been a Republican now for, ummm, a couple of days," she quipped.

So Carey and her boss, adult film producer Mark Kulkis, came to town to do a little networking with GOP heavy hitters.

The party is trying to reach out and broaden its base but, says Kulkis, "Some people don't want us here, because they think we're contrary to traditional family values."

That's for sure, Plante notes.

Christian evangelical leaders called for an explanation. The only one they got, at least in public, was from a spokesman for the National Republican Congressional Committee, who said: "We'll take that money and use it to elect more Republicans."

Kulkis paid $2,500 each for his ticket and Carey's after getting an invitation in the mail.

And, according to the campaign committee's Web site, if Carey had anted up $25,000, she could have had her picture taken with the president.

"The money that this dinner is going to raise overall is the big story for the Republicans, and if there's a minor embarrassment here or there about who attends, they're not going to worry about it," points out Congressional Quarterly columnist and CBS News Consultant Craig Crawford.