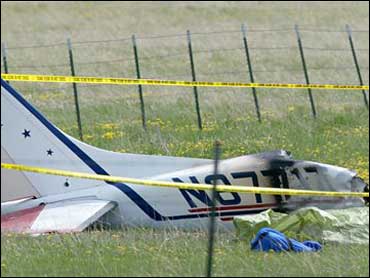 A plane crash killed five members of a group of skydivers in northwestern Montana, authorities said.

The crash happened late Saturday morning in a field in an area known as Lost Prairie, Sheriff Mike Meehan said. The Federal Aviation Administration in Seattle said the plane went down shortly after takeoff, then burned.

Near the end of a paved runway, the front of the aircraft was charred and separated from the rear.

The pilot of the Cessna 182 operated by Skydive Lost Prairie was carrying two skydiving instructors and two trainees to jumps, said Michael Morrill, a manager of the company. He said the plane took off in good weather.

Names of those killed were not released immediately. The skydivers were from Montana, said Fred Sand, owner of the company.

He said the pilot began working for Sky Dive Lost Prairie about 10 days ago and was experienced, with more than 500 hours of flying time. He had a commercial rating, Morrill said.

Sand said he believed the plane had been in good operating condition.

Federal aviation safety investigators were to arrive at the scene Sunday.

Skydiving is a relatively small sport in the state, with perhaps 60 or 70 people who are experienced jumpers, said Tina Sanders of Skydive Montana, another business that offers jumps. She said the aficionados are a close-knit group and another skydiver called her about 15 minutes after the crash happened.