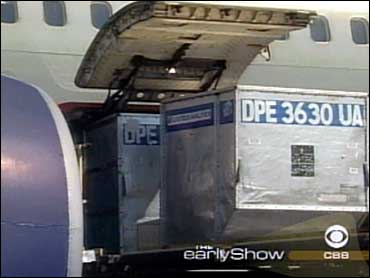 Millions of dollars, and mounds of technology have been plowed into airport security since Sept. 11. The focus: passengers and their luggage.

But what about all the cargo that travels inside the belly of the plane? How secure is it? CBS News' Trish Regan reports that there's less scrutiny than you may think.

In airports across the country, all carry-on bags and checked luggage are X-rayed before being loaded onto planes. But millions of tons of cargo, which travel on those same passenger jets, aren't screened. There are no regulations requiring that all cargo be inspected or X-rayed. That worries the Coalition of American Pilots.

Capt. Jay Nurelius, an American Airlines pilot, says, "I'm concerned that we'd get something into the cargo bay that I don't know about, and that it could contain explosives to bring an aircraft down.

In San Francisco, most shippers turn their cargo over to ground support personnel like Frank Morcillas, a terminal manager of Aero Ground.

Asked if he ever worries about dealing with this unknown cargo, Morcillas says, "Yes. My guys and myself, we don't even know what's in those containers."

Airport officials estimate that only about 10 percent of all this cargo is physically inspected. The government doesn't even own equipment capable of X-raying large containers. Meanwhile, experts say inspecting everything would financially cripple the $4 billion airline cargo industry. The Transportation Security Administration admits air cargo is a serious risk, but says that its "Known Shipper Program" screens companies that send cargo.

Mark Hatfield, Jr. of the Transportation Security Administration, says, "It is required that all those participants in the program go through a series of background checks and apply and adhere to protocol set forth by the TSA."

Still, others maintain that the Known Shipper Program is a very thin line of defense.

Capt. Nurelius says, "The known shipper program is 100 percent paper work. It tracks who shipped the product or the cargo; it doesn't track opening up and inspecting what they actually have shipped in it. So if they tell you one thing, and they put something else in it, without opening up the package, you're not going to know."

The Transportation Safety Administration is currently conducting tests to see if it can increase the percentage of cargo that gets X-rayed. But until every piece of cargo is scrutinized the same way that luggage is, there'll still be risks.

The Senate passed a bill to improve air-cargo security and eventually require 100 percent inspection of all cargo loaded onto passenger jets. That bill has sat in the House of Representatives for more than a year, and is still pending review.