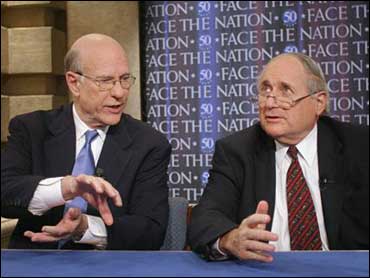 Officials reacted warily to a proposal by key Republican senators to transfer major U.S. intelligence gathering from the Central Intelligence Agency and the Defense Department to control by a new director.

The warmest response, in fact, came from the camp of Democratic presidential candidate John Kerry. His national security adviser, Rand Beers, welcomed the plan and described it as very similar to Kerry's.

But even Beers said the proposal needed bipartisan support and leadership from President Bush, whom he said was "resisting any real changes."

Mr. Bush offered no endorsement of the proposal, announced unexpectedly Sunday by Senate Intelligence Committee chairman Pat Roberts on CBS News' "Face the Nation." Mr. Bush said he was interested in finding "the best way to fashion intelligence so the president and his cabinet secretaries have got the ability to make good judgment calls," as long as the changes don't place a new layer of bureaucracy between him and "line operators" such as the secretary of defense.

"We'll take a look at it and determine whether or not it works or not," the president told reporters at his ranch in Crawford, Texas. "But there's going to be a lot of other ideas too as this debate goes forward."

Roberts offered the most sweeping reorganization proposal by anyone since the commission that investigated the Sept. ll, 2001, attacks called for major changes. He acknowledged that full details had yet to be shared with either the White House or with Senate Democrats.

"We didn't pay attention to turf or agencies or boxes" but rather to "what are the national security threats that face this country today," Roberts said of the proposals supported by eight Republicans on the intelligence committee. "I'm trying to build a consensus around something that's very different and very bold."

But he immediately ran into some resistance from a Democrat on his own committee. Sen. Carl Levin, D-Mich., said that before appearing with Roberts on CBS neither he nor the committee's ranking Democrat, Jay Rockefeller of West Virginia, had seen the full proposal.

"I think it would be better to start on a bipartisan basis," Levin said. "I think it's a mistake to begin with a partisan bill no matter what is in it."

In a statement released late Sunday, the top Democrat on the Senate intelligence panel, Jay Rockefeller complained that he had yet to see the details. However, he said, "Disbanding and scattering the Central Intelligence Agency at such a crucial time would be a severe mistake."

And former CIA Director George Tenet called the proposal another episode in the "mad rush" to make changes. "This proposal reflects a dangerous misunderstanding of the business of intelligence," Tenet said Monday.

The Sept. 11 commission called for a new national intelligence director with power to force the nation's many agencies to cooperate.

So far, the debate has focused on how much power to give that official, rather than on retooling existing agencies.

Most Democrats support the commission's view that the new director should have authority over hiring and spending by the intelligence agencies. Mr. Bush has endorsed creating the position but has not said what powers it should have.

Despite Roberts' assertion that he wouldn't abolish the CIA, some intelligence officials think that sounds exactly like what he is trying to do.

Some intelligence officials think Roberts' proposal is "unworkable and could hamper the nation's intelligence efforts at a critical time," said one, who spoke on condition of anonymity because of the sensitivity of the debate. This official added that rather than eliminating barriers between agencies and bringing functions together, "it smashes them apart."