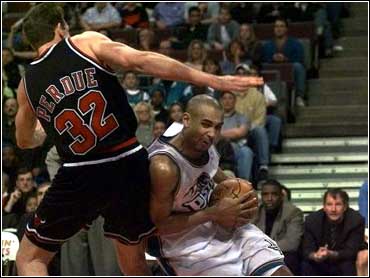 It wasn't exactly the way the Detroit Pistons expected to beat the struggling Chicago Bulls. But they'll take it.

Detroit had several chances to put away the Bulls before escaping with a 93-90 victory Sunday night.

"It was pretty ugly, but at least we got the win," Grant Hill said. "The Bulls might not win many games, but they execute well on both ends of the floor. We just had to grind this one out."

The Pistons missed five free throws in the fourth quarter, including three in the last minute, to keep Chicago in it.

"We didn't shoot well and they stayed right in the game," Pistons coach Alvin Gentry said. "Give them credit they show up every night and play."

Elton Brand led the Bulls with 28 points and 12 rebounds, but it wasn't enough to prevent a fourth consecutive loss.

"Once we started playing defense, we were able to play with them," Brand said. "We took the lead and we had a chance at the end. We can take a lot of positives out of this game, but we would still rather have the win."

With the Pistons leading 92-89, Lindsey Hunter missed a driving layup and Randy Brown grabbed the rebound to give Chicago a chance to tie with 14.4 seconds to go.

Brand missed a shot, but grabbed his own rebound and was fouled with five seconds left. He missed the first and made the second instead of intentionally missing, making it 92-90.

"I wasn't surprised. I guess they wanted to wait to take a 3-pointer instead of taking one there," Gentry said. "They figured they still had time and didn't want to decide the game there."

Chicago fouled Stackhouse, who made one of two free throws. Hunter deflected the inbound pass, and the Bulls weren't able to get a shot off.

Chicago used a 10-1 run to take a 82-79 lead with seven minutes left, then stopped their momentum by calling a timeout.

After Laettner tied the game with two baskets, Detroit took a 88-86 lead on two free throws by Hunter with 2:44 left.

Brown missed a runner and Laettner was fouled by Brand on the rebound. Laettner missed the second free throw, but Jerome Williams grabbed the ball and was fouled.

Williams also split his foul shots to put the Pistons ahead 92-88. Williams fouled Brand, and he continued the trend by splitting his attempts, making it 92-89.

Detroit led by as many as 12 in the first half, but the Bulls came back behind Brand's 14 points and 12 by Chris Carr.

"He's a really good player," Hill said of Brand. "They have so much movement in their offense that it is almost impossible to double him. Luckily, our guys came up with some stops on him down the stretch."

The Bulls led 52-47 late in the second, but Detroit scored the last six of the half to take a one-point lead into halftime.

Stackhouse had four points and an assist during that run, and finished with 10 in the quarter as the Pistons took a 76-72 lead.

Bulls coach Tim Floyd said Hill might have shot just 6-for-17, but he still played like a superstar.

"He has so many different effects on the game," Floyd said. "Tonight, he took (Ron) Artest out of the game with four fouls, he had a couple big steals on Elton down low and a couple big defensive boards. He's an extremely versatile player I think the best player in this league outside the big guys."