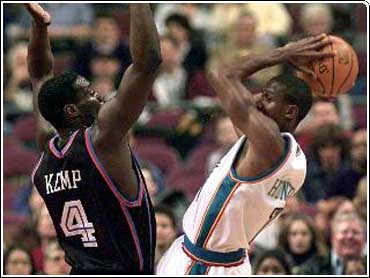 With Grant Hill still laid up and Jerry Stackhouse suffering from the flu, the Detroit Pistons knew help was needed to avoid a ninth loss in 10 games.

"I knew Grant wasn't going to be playing and Stack wasn't feeling well, so I figured I had to be aggressive," said Lindsay Hunter, who had 26 points and a season-high 10 assists in the Pistons' 105-96 victory over the Cleveland Cavaliers on Friday night.

"I told the other guys that I was going right at them on offense and defense.".

Cleveland was also shorthanded, playing without injured Bobby Sura, then losing Brevin Knight in the second quarter with a sore knee.

"Obviously, you'd like to have a full roster, but that's not an excuse," Cavaliers coach Randy Wittman said. "Lindsey got hot and we just didn't do enough to make things hard on him."

"My stomach was pretty bad all day, but the point where I felt the worst was when I was 1-for-9 from the floor," he said. "We had a lot of guys step up tonight when we needed it."

"We've got nobody to blame for this one but ourselves," Kemp said. "This was a winnable game, but we just didn't fight through the rough stretches."

Detroit opened things up in the third, hitting 3-pointers on its first three possessions on the way to a 14-2 run and a 60-46 lead. Mills had two 3-pointers an eight points in the run.

The Pistons led by as many as 15 before Cleveland cut the margin to 78-66 at the end of the quarter.

"I thought the key to the game was our defense in the third," Pistons coach Alvin Gentry said. "We forced some turnovers and got some easy baskets."

That's when Cleveland cooled off, missing its next four shots and going scoreless for nearly three minutes.

Detroit moved the margin back to 86-79, and Cleveland didn't get within a basket again.

"I was very happy with the way that we responded when they made that run," Gentry said. "It would have been easy for us to fold at that point, but we maintained our poise and got a win that we desperately, desperately needed."