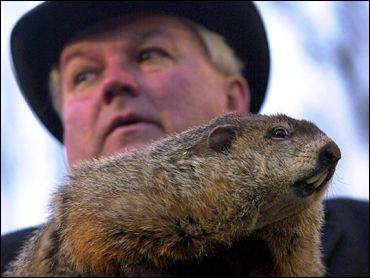 The world's most famous furry forecaster made his 118th annual weather prediction on Monday — Groundhog Day — and some of the people who descended on this small town from as far away as England weren't happy.

The groundhog drew boos from thousands of people who gathered in 17-degree weather to await the annual weather prediction.

Among the throng in attendance were Mike and Anne Castledine, a retired couple from Derbyshire, England, who caught groundhog fever after seeing the Bill Murray movie "Groundhog Day," and just wanted to experience it for themselves.

"We were quite hooked once we'd seen the movie," Anne Castledine said Sunday. Back home, "There's really no knowledge of what it entails," she said.

The tradition is rooted in a German superstition that if a hibernating animal casts a shadow Feb. 2 — the Christian holiday of Candlemas — winter will drag on. If no shadow is seen, legend says spring will come early.

The odds were in favor of Phil seeing his shadow. In the past 117 years, the groundhog is reported to have seen his shadow 93 times.

Groundhog Day also entails a lot of revelry, although alcohol has been banned from Gobbler's Knob, the site just outside of town where Punxsutawney Phil issues his proclamation. Music and dancing go on all night and the town's population of roughly 6,700 grew nearly six-fold to a record 40,000 last year. Because this year's Groundhog Day falls on Monday, a weekday, crowds are expected to be down considerably, although the festivities still include seven scheduled weddings.

"We couldn't care less if he sees his shadow," said Bill Cooper, president of the Punxsutawney Groundhog Club. "It's a people holiday."

Don Yoder, a University of Pennsylvania professor emeritus of folklore, documents groundhog celebrations across America and the day's increasing popularity in his 2003 book "Groundhog Day."

"It's a secular holiday. It's not religious. It's a fun holiday in between New Year's and Easter," he said. "It's much more important that Valentine's Day."

While sweethearts may disagree, Yoder said the day's popularity is increasing, in part because of the 1993 movie. More than a dozen states celebrate the day with their own critters, including Dixie Dan in Mississippi, Buckeye Chuck in Ohio and Gen. Beauregard Lee in Georgia.

"The imitators that exist, we embrace. We encourage," said Mike Johnson of the Punxsutawney Groundhog Club. "Imitation is the sincerest form of flattery."

"There's simply no question in anybody's mind, if you're awake and sober, who the 'Seer of Seers' and the 'Prognosticator of Prognosticators' is," he said.