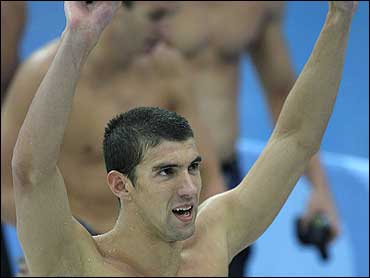 Michael Phelps did it. He broke Mark Spitz record and captivated all of us in the process.

Some of the gold medals were won in walloping fashion where he crushed the competition. At least one of the medals was won by less than a fingertip. And the relays were won in large part because his teammates also swam the races of their lives.

Much has been made of Phelps body. That it is perfectly suited to swimming. What's not mentioned enough though is how hard he works. Phelps says his life consists of three things eating, sleeping and swimming.

If he swims like a fish it's because he spends so much time in the pool. Last winter he fractured his wrist after a fall on the ice. He was convinced his Olympic dreams were over. His coach put him back in the pool with a kick board and for weeks he worked nothing but his legs.

And it turns out that was probably just thing he needed to propel him to eight gold medals.