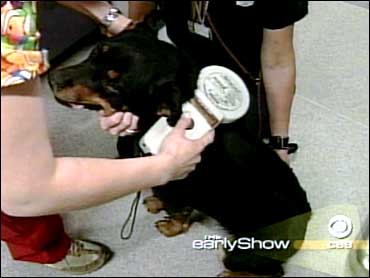 It is tough to lose a member of the family. Lisa Massey of Stafford, Va., can attest to that; she lost her dog, Hayden.

"It's still very hard emotionally," says Massey. "Hayden's gone. I'm going to wake up every day, and he's not there"

Massey had a microchip implanted in Hayden at a Banfield Pet Hospital, so if he ever got lost without his tags, he would have his owner's information with him.

Rick Sallinger of CBS station KCNC in Denver KCNC reports Hayden escaped and ended up in a shelter. But the shelter didn't realize the scanner it was using wouldn't work with the chip implanted by Banfield. The shelter had a scanner that would have detected the Banfield chip, but didn't use it -- thinking their universal scanner would do the job. Hayden was put to sleep.

"I want other people to be aware," says Massey. "I think microchipping is good, but they just need to be aware they have the correct chip in their animal."

Banfield has some 350 hospitals, mainly in Petsmart around the country. They implant chips in pets at a cost of about $30 each. But the new chips can't be read by many of the tens of thousands of scanners already in shelters across the country.

While technology has come a long way to help reunite owners with their lost pets, many shelter operators believe it's also getting in the way.

So Humane Societies across America have asked Banfield to stop implanting its chips. They say Banfield got it backwards -- implanting the chips before making sure there were sufficient scanners available to read them.

"We're not really concerned about who gets the revenues from those chips," says Bob Rhode, a spokesperson for Denver's Dumb Friends League. "We're concerned about getting those pets back to their owners."

In the Denver area, 75 percent of the shelters contacted did not have scanners capable of reading the microchips implanted by Banfield. Yet, many of the company's clinics did not warn about this when CBS News visited with a hidden camera.

"I feel we are doing our best to inform [customers]," says Banfield Pet Hospitals' medical director Dr. Doug Dilworth of the number of shelters that can read the Banfield chips. "If there are cases where that has not been done, we need to make sure that is done."

But Banfield says the chips it uses are easier to detect, less likely to move once inside the pet and chosen by the international standards organization used in 148 countries. Critics point out the United States is not of those countries that uses the chips as a standard.

"I think this is very irresponsible of profit-making corporations to put their focus on making a buck at the same time they are selling a false sense of security to people," says Patricia Mercer, a spokesperson for Houston Society for the Prevention of Cruelty to Animals.

Banfield has now announced that it will stop shipping its microchips to its pet hospitals until scanners can be placed in all shelters within 25 miles of each of its facilities.

"We are working to get more scanners in place," says Dilworth. "All the large shelters were targeted and we should have scanners."

The value of microchips in pets is measured in mended hearts. Sherry Brown was reunited with her huskies Tahoe and Bones.

She says her reunion was made possible "because of [Banfield] reading off of the chip and it had all the information on the chip -- as to phone number and address and who the owner was of the dog."

But as the industry fights over what type of microchip will prevail, pets remain unclaimed and sometimes are put to death.