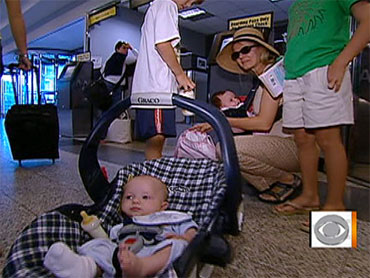 If you're planning a family trip on a plane, the National Transportation Safety Board (NTSB) has a safety alert for you. They say you should make sure your baby has his or her own seat.

"Early Show" Consumer Correspondent Susan Koeppen explains that, under current rules, babies under the age of 2 can fly for free if they fit in their parents' lap. But the NTSB says, that's just not safe.

Koeppen said, "Board any plane and the rules are clear. All bags must be stowed for takeoff and landing. Seat belts must be buckled -- but not so when it comes to babies."

With the summer travel season about to take off, the NTSB is urging parents to buckle up babies in their own seats on planes.

Hersman said, "The laws of physics don't change for babies. They need to be restrained, too."

The NTSB, along with the Association of Flight Attendants, has tried for years to convince the Federal Aviation Administration and airlines to require seats for all passengers -- including babies.

But many parents like the convenience of holding their children for free instead of buying a ticket.

Brown knows first-hand the deadly consequences of lap-held children. She was a member of the crew on United flight 232, which crashed during an emergency landing in Sioux City, Iowa. More than 100 people died -- including a 22-month-old lap baby. His mom, who was belted in, survived.

Brown said, "Not all the love in the world could hold a child under those conditions. It's like playing Russian roulette to put them on a lap."

Koeppen said safety experts also point to sudden turbulence, which also puts lap-held children at risk. They can fly into the air and become projectiles.

Terra Converse was flying with her baby, Jake, on her lap, when she lost her grip during heavy turbulence.

Converse said, "That was so hard not being able to protect him."

He flew out of her arms, and slammed into the overhead compartment.

Jake survived with minor injuries, but not all lap babies are so lucky.

On its website, the FAA encourages parents to use child safety restraints, but says it's not ready to make it a rule.

Debbie Hersman, chairman of the NTSB, said, "One thing we do know is that restraints save lives and that everyone needs to be restrained, especially our most vulnerable passengers and those are our children."

The FAA says it fears if parents are required to buy tickets for their babies, they'll opt to drive instead, which the FAA says is more dangerous than flying.

On "The Early Show," Koeppen said there are options for parents who want to buckle up their kids on planes, such as a child safety seat.

Koeppen said, "Make sure you check to see if it has a label on the side that says it is approved for use on an aircraft, and measure the width and make sure it is going to fit."

Another option is a CARES harness.

Koeppen said, "This goes around the seat and creates a five-point harness for kids who weigh 20 to 40 pounds."

But what about the airlines? Do they offer discounts for child seating?

Koeppen said airlines used to offer discounted fares for infants. However, it's harder to find those discounts now. She suggested parents call the airline to see what they're offering.