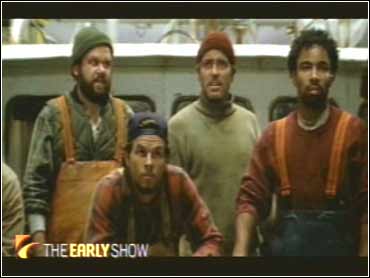 The new George Clooney movie The Perfect Storm, which opens this weekend at theaters nationwide, is based on the true events of 1991, when a massive storm lashed the northeastern coast.

Now, even meteorologists are finding fame in explaining the science behind the term. CBS News Correspondent Lee Cowan spoke to meteorologist Bob Case, who first used the expression.

Case, who works for the National Oceanic and Atmospheric Association, held a round table discussion in Washington, D.C., Thursday to discuss the storm. He recalls the day the storm hit. He was on duty in Boston when three storms violently collided off the coast of New England - a meteorological phenomenon.

A powerful, low pressure system off the East Coast slammed into a hurricane that had formed to the south. The collision between the warm moist air and the cold dry air created a monster that Case called "the perfect storm."

"You say a word and nine years later it comes back to haunt you," said Case.

"This storm was one of the worst storms, I'd say, of the last 25 years, in terms of its intensity, its extent and duration," said Case's co-worker, Louis Uccellini. "The winds did approach and exceed hurricane force winds over a large area for periods of time. The waves approached 50 feet on average. There were probably individual waves, that is rogue waves, that approached 70, 80, 90 feet, maybe even 100 feet."

"One aspect of this storm was that it was well-predicted," said Uccellini. In 1991, meteorologists were often able to predict accurate weather forecasts up to four days in advance.

"If you get waves that have a gradual roll to them, ships can deal with those. If you have waves that have a much shorter wave length, they come at you with much more rapidity. They're much more dangerous to ships. And we can actually predict those conditions in advance," said Uccellini.

Hollywood has never been shy about recreating events - however dreadful - however rare. The deadly Nor'easter had both.

But in the town of Gloucester, Massachusetts – which lost six fisherman to the storm – some people feel uncomfortable about anyone profiting from the tragedy.

"Actually seeing some of the things that happened to some of these men, I don't know whether that's an easy thing to do for some of the family members," says George Clooney.

David Moore helped save three aboard a sinking sailboat. Now he's in the eye of another storm - publicity.

"Other people have done things much more difficult. I just happened to have my name mentioned in a best-selling book," said Moore, former Coast Guard rescuer.

Most people agree the movie is historically accurate and is expected to create a storm at the box office. But it's also a grim reminder to a small community that a killer storm that was supposed to come around only once a century - can now come around at the push of a button.