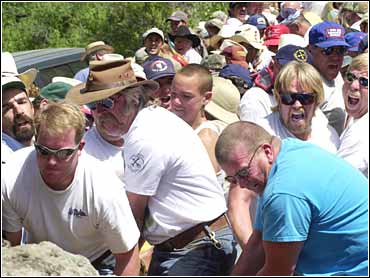 Hundreds of people joined together on Independence Day to hoist a huge boulder they dubbed the "Liberty Rock" and lay claim to a remote dirt road in defiance of the U.S. Forest Service.

"You can see what people power does," said state Assemblyman John Carpenter, a Republican and one of the original leaders of the shovel movement.

The demonstration was the latest chapter in a dispute between Washington officials and locals upset with federal land policy.

South Canyon Road was washed out in a flood in 1995. Federal authorities have blocked efforts to reopen it, fearing any work would damage the stream bed and jeopardize the existence of the bull trout population in the adjacent Jarbidge River.

The bull trout was listed as threatened under the Endangered Species Act in 1998.

The Brigade claims the county is the rightful owner of the narrow dirt road and the Forest Service is the intruder.

Last week, a federal judge denied an injunction sought by the Justice Department to halt the rally, but warned members of the brigade they could be prosecuted if environmental damage occurred.

The boulder removed, the crowd erupted in cheers as a pickup truck carrying Jarbidge's oldest resident, 90-year-old Helen Wilson, drove over 900-foot section of reopened road near the community of about two dozen.

An estimated 500 people from around the West and as far away as Maine, Florida, Rhode Island, New York and Vermont converged in this remote outback to take part in the Shovel Brigade demonstration. Sponsors had predicted up to 10 times as many.

The scene resembled a holiday picnic more than a low-grade insurrection.

Protesters said the Pledge of Allegiance and sang "The Star-Spangled Banner" before taking up positions along the "tug-of-war" lines attached to the boulder.

Federal authorities stayed away from the two-day event, but have said they will monitor the area later to determine if protesters caused any environmental damage. If so, they could face prosecution under Endangered Species and Clean Water acts.

The only environmentalists at the gathering was a group called "The Old Broads for Wilderness."

They did not confront demonstrators, but mingled with them to make their presence known.

"They're making a mess to make a point about the federal government," said the group's executive director Susan Tixier. "I don't think the Forest Service is always right," she added, "but here they did the right thing closing the road."