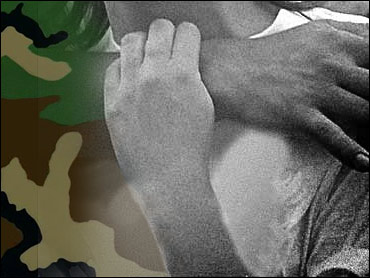 Sexual assaults in the military have been cut in half in recent years, the Pentagon said Wednesday, responding to criticism from lawmakers who say the Defense Department is not doing enough to address the issue.

"No war comes without costs, but the costs should be borne out of conflict with the enemy, not by egregious violations by some of our own troops," said Sen. Susan Collins, R-Maine.

David Chu, undersecretary of defense for personnel, said new figures show the rate of sexual assaults against women in the military fell from 6 percent to 3 percent between 1995 and 2002.

"It's still too high, there's still a long way to go, but it's down substantially from where we were," Chu told a Senate Armed Services subcommittee.

Despite the reduction, there have been at least 109 reports of sexual assault of troops deployed in the Middle East — including Iraq and Afghanistan — over the past 14 months, Pentagon officials told senators.

Christine Hansen, executive director of the Connecticut-based Miles Foundation, a support group for military victims of domestic and sexual violence, said 68 women, most of them officers, contacted her organization with stories of sexual assaults at the hands of fellow members of the military. At least 13 had also reported the assaults to military officials.

Defense Secretary Donald H. Rumsfeld has asked for a review of sexual assault policies and the victim support network throughout the department. He asked for a report by the beginning of May.

"As we work to rid our corps of these vile acts, every victim is a wounded comrade, one who will be treated with respect and dignity and one who will not be left behind," said Gen. William Nyland, assistant Marine Corps commandant.

The chairman of the Senate Armed Services said senators will be supportive of the Pentagon's reform efforts and watching them closely.

"This committee is prepared to back the United States military to achieve zero tolerance," said Sen. John Warner, R-Va. "We're here to support you and if you don't carry it out, we're going to take over."