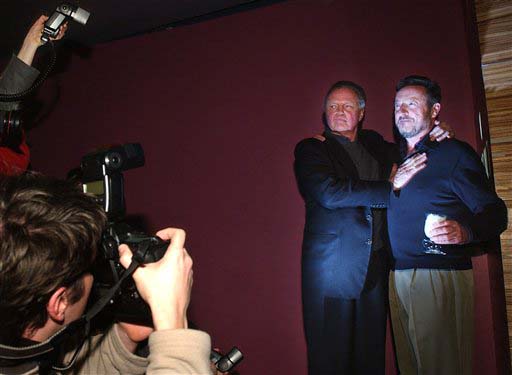 Walter Payton won respect for carrying the football. But he was admired even more for the way he lived his life off the field.

"It's sad to me because he had a lot greater impact on me than I had on him," said a red-eyed Mike Ditka, Payton's coach with the Chicago Bears. "He was the best football player I've ever seen. And probably one of the best people I've ever met."

"The memories I have of Walter are good," added Ditka, now coach of the New Orleans Saints. "I don't have any bad ones."

Payton died Monday of bile duct cancer that was discovered during the course of his treatment this year for primary sclerosing cholangitis, a rare liver disease.

"He meant so much to the city of Chicago," said former teammate Jim Harbaugh. "`Sweetness.' There may not have been a better nickname for a player. Not only on the field, but his personality was that way. Chicago loved him. He did a lot for that city. Just the way he played, and just the type of person he was."

Payton rushed for 16,726 yards in his 13-year career, one of sport's most dominating records. And Barry Sanders ensured it would be one of the most enduring, retiring in July despite being just 1,458 yards shy of breaking Payton's mark.

"I feel empty. There's no other way to describe it," said Dallas' Emmitt Smith, the active rushing leader. "This is a great loss. Walter Payton was an inspiration to me by the way he carried himself on the field and off the field."

Payton, who was selected to nine Pro Bowls and inducted into Pro Football Hall of Fame in 1993, was remembered as one of the best football players in NFL history.

"All of us in the NFL family are saddened by the loss of Walter Payton," said NFL commissioner Paul Tagliabue. "He was without a doubt one of the greatest players in the history of the sport."

"Walter exemplified class, and all of us in sports should honor him by striving to perpetuate his standard of excellence. Walter was an inspiration in everything he did. The tremendous grace and dignity he displayed in his final months reminded us again why `Sweetness' was the perfect nickname for Walter Payton."

Payton's impact was found well beyond football and in the city where he played.

"Walter was a Chicago icon long before I arrived there," said Michael Jordan. "He was a great man off the field, and his on the field accomplishments speak for themselves."

Mike Singletary, his teammate from 1981-87, visited with Payton before his death.

"This weekend, having the opportunity to spend as much time with him as I could, reading scriptures with him and praying for him with him," Singletary said. "Outside of anything else Ive seen, the greatest run, the greatest moves what I experienced this weekend was by far the best of Walter Payton I've ever seen.

"As a person, he was a bright spot for any darkness that appeared," Singletary said.

President Clinton said Payton faced his illness "with the same grit and determination that he showed every week on the football field."

"In the long highlight reel of this life cut short, Walter Payton will always be a man in motion: breaking tackles, breaking records, clearing every obstacle in his path," Clinton said.

"We had different styles but I always enjoyed watching him, the way he ran and the way he played the game," Harris said.

Payton seemed businesslike on the field, but would often find a way to loosen up a tense atmosphere.

"During the playoffs, he'd pull my socks down in the huddle," said Buffalo Bills quarterback Doug Flutie, a former teammate. "When I was in Chicago, it was kind of a hostile atmosphere and Walter was one of my closest friends on the team. It was a privilege to play with him and I knew it at the time."