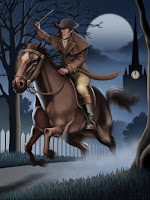 Treasury Secretary Hank Paulson doesn't resemble Paul Revere, our country's famous midnight rider, but he's definitely signaling that a British-backed effort to resolve the banking and economic crisis is on the way to America. Following the Brits' lead, Paulson now wants to put taxpayer money directly into banks, often in return for ownership stakes.
Since we're all about to become bank shareholders, a few questions seem in order. Will taxpayers back every ailing bank that knocks on Treasury's door, or only selected lenders? And if we pick and choose, what's the criteria for allowing some banks to fend for themselves while giving help to others?

Will there be a pronounced "too big to fail" doctrine? Bank of America and JP Morgan Chase (Citigroup and Wells Fargo are also in the mix) have helped the government by taking over an ailing financial institution or two. As a result, each could come under significant financial strain. Will mega-banks have special sway or goodwill with Treasury?

What's the economic advantage of having taxpayers act as owners-of-last resort? Are there limits to Treasury's largess? For instance, if an investment goes even more sour, does Treasury pour additional money into it or simply walk away with a whopping loss? And how does buying into banks help ease the mortgage crisis or keep people in their homes?

But there's plenty of risk, too. The public could eventually own a bunch of dog banks, which will require even more taxpayer funding. Already, the government is having to plow more cash into its so-called investment in insurance menace AIG, not to mention backing Fannie and Freddie.

The original intent of the $700 billion bailout was to carve out toxic securities from banks and other lenders. That move was also meant to spruce up balance sheets and allow lending to begin anew. Apparently, that possibility wasn't enough to ease global investor panic.

Cripes! Some choices. One day, perhaps we'll understand how we got into this mess. Until then, it appears we're stuck making ad hoc and crummy decisions that may, or may not, salvage this very serious situation.

This much is clear: Like Paul Revere, we're seeing the start of a revolution. This time around, however, it's a global economic revolution.