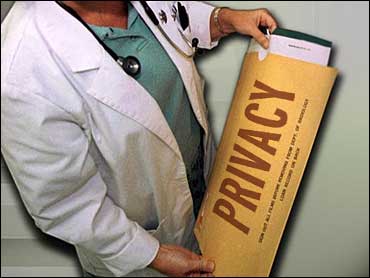 My dentist recently told me that he was retiring and had sold his practice. Another dentist bought his furnishings and equipment and all his patients' records. I don't care about the furnishings or equipment, but selling our records doesn't seem right. If a doctor or a dentist refers a patient to another doctor down the street, and that second doctor gives the first doctor a $100 kickback, that's considered unethical. Then why is it okay for a doctor to send a couple of hundred patients to a doctor down the street in exchange for thousands of dollars?

Shouldn't he have come to me ahead of time and said, "I sold my practice to another dentist. Would it be okay if I gave him your records?" Nobody likes these kinds of surprises. We're not happy when, without consulting us, Hollywood decides to change the actor who plays "James Bond." If we get upset when we turn on a sitcom and see that they suddenly have a new dad, is it any wonder that we aren't all that comfortable with having a stranger in a white mask getting ready to put some sharp objects in our mouths?

A medical practice isn't just a business. I've never seen a neon sign in front of a building that reads, "Dr. Jane Smith, Gynecology and Air Conditioning Repair." Doctors are held to higher standards. It's part of the social contract we make with them. They get the title, "doctor," they get the best tables in restaurants, and they get to decide how cold their examining rooms are. In exchange for these perks, they are expected to conduct their professional lives at a higher standard than other businesses. It's a package deal.

I've seen enough "Law and Order" episodes to know that if the police suspected me of murdering a fashion model to prevent her from telling my ex-wife that I was defrauding a children's charity, the police could not have access to my medical records without a court order. But if a doctor buys my old doctor's practice, he automatically gets to have access to my medical records without my permission. Should patient-doctor confidentiality apply to everyone except doctors who are willing to pay?

Let's say the retiring Dr. Jones is deciding which of three doctors -- all of whom he knows and respects -- he should recommend to his patients. If his practice is for sale, isn't there a chance that he might sell it to the one who is willing to pay the most? Just because this possibility exists makes it something that should be avoided. Why can't they just recommend doctors to us, and not get paid by those doctors whom they are recommending?

I decided to call the experts to try to get some clarity on this issue. The person in charge of ethics for the American Dental Association never got back to me. Perhaps, the Person in Charge of Phone Messages was tying up the dental ethicist with his or her own moral crisis. I was able to reach Dr. Frank A. Riddick, Jr., the American Medical Association's chair of the Council on Ethical and Judicial Affairs. He told me that when a doctor sells his practice, he doesn't have to include patients' records as part of the sale. He can sell the new guy all his unused tongue depressors and rolls of that white papery stuff that they make us lie down on, and he can put his patients' records in storage or file them at a county hospital. Dr. Riddick sounds like a fair and wise man, doesn't he? I'll bet he'd never consider selling his patients' records.

As for me, even though I blindly went to the new guy twice, I've decided to look for a different dentist. How else can I express my displeasure? I'm tempted to go to the new dentist one more time. Then when the bill comes, I could say, "Try to collect from my friend down the street. He's the guy I've sold my practice to."