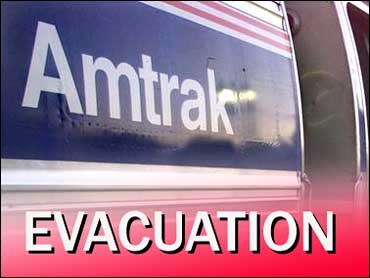 A Chicago-bound Amtrak train carrying nearly 140 passengers was evacuated near Denver after a passenger threatened the crew and others onboard, claiming he had a weapon and bomb, an Amtrak spokeswoman said early Monday.

218 people were evacuated and loaded onto buses to Denver's Union Station.

Authorities detained the man for questioning and did a sweep of the baggage car and the passenger car where he was sitting. The man was carrying a Bowie knife, and a bomb-sniffing dog focused on his bag, Romero said.

"There was something that was in that bag that made the dog stop," Romero said, declining to elaborate.

Passengers were loaded onto buses and brought to Union Station in Denver. Those passengers who were destined fore Denver had to then wait before they could go back to the train to retrieve their belongings. Passengers destined for Chicago eventually resumed their journey.