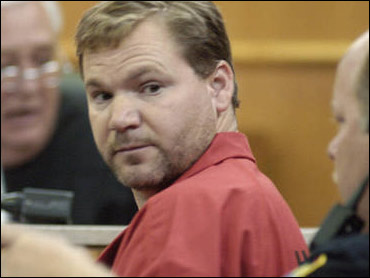 Tony Pope went to prison for bludgeoning his girlfriend to death with an iron skillet and was back out on the streets five years later despite a warning from a friend of the victim.

"It not only scares me to think that someone like this can go free, but it puzzles me as to why you'd release him to possibly do it again," Vicki McCurry wrote to Tennessee's parole board before a 2001 hearing.

The board did not listen. On a 4-0 vote, it released Pope after he had served one-third of his 15-year sentence.

"I'd give my right arm to change that vote," said Bill Dalton, one of seven gubernatorial appointees on the board.

Earlier this month, Pope was charged with killing his wife with a hammer; strangling his 13-year-old stepdaughter; and fatally dropping and punching his 5-week-old son. Investigators said Pope told them his wife was leaving him and taking the children.

Up until then, Pope had worked at a lumber company while on parole and had stayed out of trouble.

"I don't want people to think all the parolees out there are potential Tony Popes," board spokesman Jack Elder said. "This is a very unusual situation to have a crime of this caliber committed by one of our parolees."

Pope pleaded guilty a decade ago in the 1995 slaying of Susan Yarbrough, 40, at their home in suburban Chattanooga. Pope beat her in the head, ribs and throat so hard that he shattered the 18-inch frying pan, police said.

Dalton said Pope was paroled because he had served the average amount of time for such crimes and because the risk that he would commit another offense was considered low.

At the time, the law said he had to serve one-third of his sentence before becoming eligible for parole. That law has since been changed to 85 percent in second-degree murder cases like Pope's.

State records for fiscal 2003 and 2004 show the board approved fewer than one-third of parole requests annually. The board considers more than 12,000 such cases annually, and Dalton said: "If you only let go good guys, you are not going to let anybody go."

According to Elder, most parolees are living productive lives. He said the recidivism rate among Tennessee's parolees is 25 percent, compared with 34 percent nationally.

Yarbrough's friend, McCurry, said she wrote numerous letters to the board opposing Pope's release. She frequently visits her friend's grave.

"I went and sat down at the cemetery with Susan and said, `He's done it again, only this time he has taken innocent children,"' McCurry said. "I am going to do all I can do to see that this man doesn't do it again. Where does it stop?"