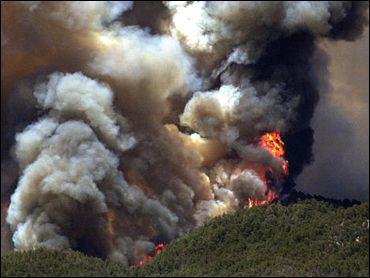 Firefighters armed with shovels and backed up by slurry bombers and helicopters fought a pitched battle with a wildfire that leapt across treetops and threatened surviving homes in this mountain community.

The Aspen fire has so far charred more than 12,400 acres on Mount Lemmon just north of Tucson and more than 250 homes have been destroyed.

No more buildings were lost overnight, said fire spokesman Gerry Engel, but the blaze was only 5 percent contained early Monday. CBS affiliate KOLD reports the fire is moving up to two miles a day.

On Sunday, the wildfire was surging into a wilderness area down the north slope of the mountain, and a youth camp and two ranches downhill were evacuated as a precaution.

Engel said firefighters had planned to begin working on digging lines ahead of the fire's northern edge Monday.

Seven highly trained fire crews from Oregon have been sent to Arizona to help with the fires, said David Widmark, a spokesman for the Northwest Interagency Coordination Center in Portland.

He said about 140 firefighters from Oregon were sent to Arizona, plus three air tankers. The crews are from the Forest Service, the Bureau of Indian Affairs and the Department of the Interior, he said.

More than $2.5 million has been spent so far to fight the blaze.

Firefighters said lighter vegetation at lower elevations eventually will help them get a handle on the blaze. Even so, they expect it to take a few weeks to completely contain it.

Around Summerhaven, crews using hand torches, which drip flame to start backfires, and aided by air tankers succeeded Sunday in keeping the fire away from dozens of surviving homes and an observatory. The desperate defense came one day after fire officials said they'd begun to take the offensive against the Aspen fire.

"Firefighting is a job that takes you two steps forward and one step back. Today was one of those days," said Roy Hall, operations chief for the firefighting effort.

The fire, fueled by pine forest ravaged by years of drought and a beetle infestation, roared through Summerhaven on Thursday. The flames soon spread across the top of 9,157-foot Mount Lemmon and headed down the north slope.

The fire's run downhill prompted officials to evacuate the YMCA's Triangle Y Ranch Camp, which had been scheduled to host 250 kids beginning Sunday. The camp was about three miles from the fire's northern edge Sunday night and wasn't imminently threatened, Hall said.

With airplanes dropping slurry and helicopters dousing flames with water, firefighters held a line Sunday protecting dozens of homes on the mountaintop just southeast of Summerhaven after burning embers started a fire across it, Hall said. Firefighters also apparently saved a University of Arizona observatory just west of Summerhaven by lighting backfires.

As the battle continued on the mountain, Mia Hansen watched the smoke from her Tucson home Sunday. Then she went to the fire command center at a Tucson high school hoping for word on her summer cabin.

"Every morning I wake up and look out my midtown window and see it move closer to our area," Hansen said. "When I see a big puff of smoke, I kind of lean forward a little more and then sit back, take a breath and realize there's not a whole lot anybody can really do."

Nance Crosby and Robin Quillian, who co-own a cabin on the mountain, ran their fingers along U.S. Forest Service maps to the spot where their cabin may or may not be standing. It was well within the area marked as having burned, but a fire information officer told them that fire is fickle, burning one home, sparing another.

"The hardest part is not knowing one way or another," Crosby said. "The uncertainty is like a slow death."

The cause of the fire, which began Tuesday, remained under investigation. Investigators were expected to survey the fire's starting point Monday.

The community of Summerhaven had about 100 year-round residents but its population grows during the summer and weekends as Tucson residents drive up the mountain to escape the desert heat. There were about 700 homes on the mountaintop before the fire.

The Aspen fire was one of five wildfires burning in Arizona on Monday, according to the National Interagency Fire Center. An 11,200-acre blaze in the Tonto National Forest was 50 percent contained. The other three fires had yet to burn more than 1,000 acres, but none were more than half contained.

While most attention is focuses on Arizona — five fires are burning 25,000 acres — a single fire in Alaska has consumed more than 36,000 acres.

New Mexico is also burning, with five fires raging across some 23,000 acres. The largest, in Gila National Forest, was estimated at more than 22,000 acres and was not at all contained.

The number of fires this year, and their size, pale in comparison to the two most recent fire seasons.