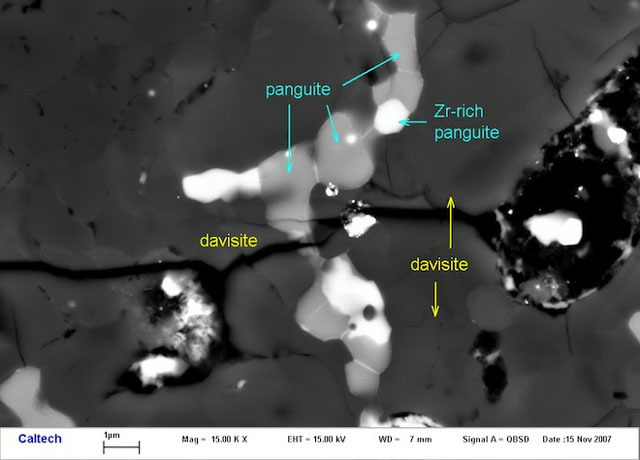 (CBS News) A meteorite that fell to Earth over forty years ago is still revealing its secrets to the science community. A researcher from the California Institute of Technology has discovered a primordial mineral in the space rock: a substance previously unknown to humankind.

Caltech geologist Chi Ma has spent years probing a meteorite from 1969 that fell over the northern Mexico state of Chihuahua. His research has revealed a previously unheard-of mineral called panguite. Ma and his team have determined that panguite is one of the oldest minerals in the galaxy; they estimate the mineral coalesced in space roughly 4.567 billion years ago.

The mineral's name comes from Pan Gu, a giant from ancient Chinese mythology who, according to legend, separated the earth and sky with a swing from his mighty axe.

"Panguite is an especially exciting discovery since it is not only a new mineral, but also a material previously unknown to science," study researcher Chi Ma, a senior scientist at Caltech, said in a statement.

The meteorite, named Allende, broke into pieces in the sky over Mexico in 1969. Ma and his team used an electron microscope to probe the interior of the space rock. Panguite itself is an interesting mineral, not only for its age but because of its unusal composition. The mineral contains common elements like oxygen and aluminum as well as more exotic ones like zirconium and scandium.

The study was published in the July issue of "American Mineralologist."