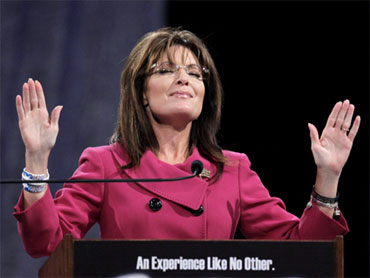 Former Alaska governor Sarah Palin is out campaigning for Tea Party candidates, but she may have her eyes on something bigger: the White House.

Palin has been raising her profile and increasing her clout within the Republican Party for months, fueling intense speculation as to why.

Her appearance in Kentucky on Thursday was vintage Palin.

"We're gonna take back our country and we're gonna turn things around!"

She was campaigning for Republican Senatorial hopeful Rand Paul, one of the Tea Party insurgents she has endorsed - sometimes to the chagrin of GOP regulars who worry they are too extreme, unelectable, or both.

It's a reaction she apparently relishes.

"The hierarchy, and, you know, they're not likin' this,"

Iowa Republican State Chairman Matt Strawn said, "We're just fortunate to have her here because she certainly energizes Iowa Republicans at all levels."

But Democratic strategists say the more Sarah, the better for them.

"The very best organizer and fundraiser for the Democratic Party is going to be here in Iowa - Sarah Palin," said David Plouffe.

Palin isn't saying what her long-range intentions are. But as they say in political circles here, nobody comes to Iowa by accident.

Can one appearance in Iowa constitute the beginning of a presidential campaign? CBS News chief Washington correspondent Bob Schieffer says it might.

But on "The Early Show" this morning, Schieffer said the fervor of voters who want to throw out incumbents in favor of candidates more right- or left-leaning is worrying the Republican Party establishment, who have long memories.

"What is really bothering the establishment Republicans right now is what happened to Republicans back in 1964," Schieffer told anchor Harry Smith. "You know, they had almost won in 1960 when Nixon ran against Kennedy. The next time around, 1964, Republicans threw out all the establishment people, all the leaders of their party and nominated Barry Goldwater - as I've said many times, a very good man but someone far to the right of the mainstream of the Republican Party. They lost in a landslide.

"Same thing happened to Democrats in 1972: They threw out all the establishment people, leaders in their party, big city mayors like Dick Daley, and nominated - again, a very good man - George McGovern, but someone far left of the mainstream of their party, and they lost in a landslide.

"That's what's bothering the establishment Republicans now: They're worried, are they headed to something like that in 2012?"

Smith said the GOP's task is to harness the passion and enthusiasm of Tea Party activists without going over the electoral abyss.

Schieffer agreed: "These people are committed. A lot of these Tea Party folks are not really Republicans. You know, they're anti-tax, they're very, very conservative. They tend to be older. In mid-term elections, you don't have young people turning out very much to vote. And they were a powerful force. I mean, there's absolutely no question about it. Sarah Palin's endorsement meant a great deal to those particular people.

"But, how is this going to play in November? And that's what they are all grappling with: How do you keep the enthusiasm but, at the same time, how do you appeal to the people in the middle, the independents, who in the end are always the ones who decide the elections?"