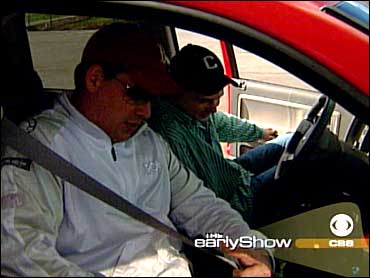 Two years, two tournaments, two victories by Se Ri Pak. But this time she had to stare down five others in a crowded playoff to win the Jamie Farr Kroger Classic.

"It was like a shootout for the tournament," Pak said. "It was better than playing a round tournament-style."

Pak, a winner by nine shots a year ago, was the last of six players to putt on the first playoff hole. From below the hole, she rolled the ball into the heart of the cup to collect the $135,000 first-place check and her second victory of the season.

Pak was joined by Karrie Webb, Mardi Lunn, Sherri Steinhauer, Carin Koch and Kelli Kuehne in the playoff. They played No. 18, a 532-yard, par-5 hole, in a sudden-death sixsome that took match play to an extreme.

After the first three players putted, Koch and then Kuehne barely missed their birdie putts. Pak's nestled in the cup and the large gallery surrounding the green and lining the fairway at the top of a large hill overlooking the hole roared its approval.

There have been three previous five-player playoffs, the last in 1981.

Pak shot a final-round of even-par 71 to make the playoff at 8-under 276. The round was played in high humidity and temperatures approaching 100 degrees.

The loss was particularly bitter for Koch, a 28-year-old Swede who was seeking her first LPGA victory. She held a two-stroke lead coming to the 72nd hole where Pak would later hit the winning putt.

Koch's drive found a grove of pine trees left of the fairway and she hit trees on her next two shots. That left her 105 yards short of the green, from where she hit a 9 iron over the green. She fluffed her chip, which ended up on the fringe and 17 feet behind the hole, and then two putted.

"I did everything bad on one hole," she said. "It's hard. I din't know what was going on. I didn't look at the scoreboard. When I looked, it was coming up with different players' names. I thought maybe I was tied."

Lunn, playing in the group immediately behind Koch, said she was in the middle of her backswing on the last hole when she heard the crowd moan as Koch's double-bogey was posted on the leaderboard.

Before catching a quick flight to Sweden, Koch added, "I was mad because I let everyone come into the playoff. I made some stupid mistakes."

Kuehne, who recorded a 5-under-par 66 earlier in the day, had to be summoned by cell phone after leaving the course. Down by two shots with Koch playing the finishing hole, she thought she had been eliminated from a potential playoff. She and her fiance headed to a restaurant 10 minutes away and ate dinner.

While talking on her phone in her hotel parking lot, she noticed she had a message. When she checked it, it was an LPGA official frantically telling her she was in the playoff.

"I drive like 90 mph coming here. OK, it's my first playoff and I'm not even going to be here for the tee off," the second-year player said. "But it was good for me because I didn't have the time or the chance to be nervous."

Lunn, who had led each of the first two rounds, Webb and Steinhauer each shot 70, while Koch had a 69.

Webb said she thought she had to hit her 8-footer for birdie on the last hole of regulation just to finish second to Koch.

"I wasn't prepared to make the putt to win," she said. "It changed my mindset."

Steinhauer said the playoff was charged with electricity.

"It was pretty exciting," she said. "You could tell the people really enjoyed what was going on."

A year ago, Pak shot an LPGA-record 61 in the second round and finished at 261 for the lowest 72-hole total in tour history, winning by nine strokes.

This time, Pak never could string together any birdies. She was 1-under through 11 holes, but then bogeyed the 12th and 15th holes before getting to 8-under with a birdie at the 16th.

There were dramatic swings up and down the leaderboard all day. Six players had at least a share of the lead at one time or another.