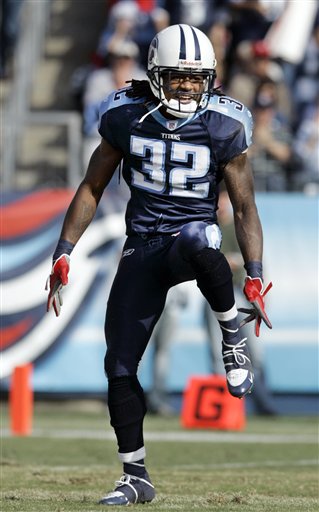 Tennessee cornerback Adam "Pacman" Jones is scheduled to appear in court in Georgia later this month on obstruction charges from an incident with police last year, The Tennessean reported Wednesday night.

Jones, who has been staying with family and friends near his hometown of Atlanta, was recently accused of being involved in a fight at a Las Vegas strip club that ended in the shootings of two bouncers and a customer. Police have not named any suspects in the case and no one has been charged.

Now Jones is scheduled to appear in Superior Court in Fayetteville, Ga., on subpoenas for felony and misdemeanor obstruction of justice charges for an incident outside a home in February 2006, The Tennessean reported on its Web site Wednesday night. Jones owns a home in Fayetteville.

"One of our officers was involved in a traffic stop with him, and after Pacman and others ran into a home, there was a physical altercation between him and the officer, and he was involved in that. He was arrested for that," Police Chief Steve Heaton told the newspaper.

It wasn't immediately known why the charges weren't filed earlier.

The Tennessean also reported that Jones was arrested and charged with marijuana possession in the same county a month later, but the charges were later dismissed.

Mike Pruitt of the Georgia county's Drug Task Force said marijuana was found in two rooms of a home belonging to Jones by officers executing a search warrant. When Jones drove up to the home, Pruitt said he smelled marijuana coming from Jones' car.

"I asked him why his (Corvette) smelled so bad and he said, `We were smoking it on the way down here from Nashville,'" Pruitt told the newspaper. "Personally, I think the NFL needs to change its drug policy because (players) basically know they are going to get drug tested.

"I asked him, `Why do you want to throw your career away for a bunch of marijuana junk?' He said, `I know when I am going to get drug tested, so I quit doing it.' It's just crazy."

Pruitt said he did not know the marijuana charges were dismissed.

The alleged obstruction occurred one night in February when Jones and friends were sitting in a car outside a house around 1 a.m., Heaton said. Police had been monitoring the area for burglaries and when they approached the car there was a verbal confrontation. Jones wasn't suspected of being involved in any burglaries.

Including the most recently reported Georgia incidents, there have been 10 times Jones has been in trouble and the police have been involved. He has been arrested four times. Charges from a Nashville nightclub incident in July 2005 were dismissed in March 2006. A judge dismissed a simple assault charge for spitting on a woman on Feb. 1.

The Titans have said they are monitoring Jones' legal troubles, but have refused to comment on any of the allegations.