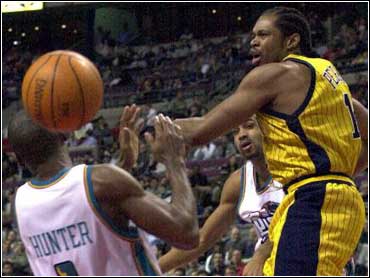 Good thing for the Indiana Pacers that Rik Smits was back in the lineup Wednesday night.

Smits returned from a back injury with a season-high 29 points, helping the Pacers overcome Dale Davis's first-quarter ejection and beat the Detroit Pistons 118-111.

Smits, who missed three games, didn't get much of a chance to play with his frontcourt partner.

With 4:03 left in the first period, Davis was given two technical fouls by referee Mike Mathis after arguing a three-second violation.

Reggie Miller and Jalen Rose each scored 23 as the Pacers won for the sixth time in seven games.

"We didn't change the game plan a bit when Dale went out, we just put another player in the game," said Pacers coach Larry Bird. "Our bench is strong enough to come in and pick up the slack."

Austin Croshere saw most of the playing time in Davis' spot, and finished with 18 points on 7-for-10 shooting.

"I just got some good looks tonight, and I was able to capitalize on that," he said. "My teammates were able to find me a little more."

Grant Hill led Detroit with 24 and Lindsey Hunter had 20, but the Pistons lost for the fourth time in five games.

The Pistons were angry after the game that they shot only 17 free throws, compared to 36 for the Pacers.

"It is very strange to me that all of a sudden, we can't get to the free-throw line not at home, on the road or in a barn," Pistons coacAlvin Gentry said.

"Grant Hill and Jerry Stackhouse were on top in free-throw attempts, and tonight Jerry shot one free throw in 39 minutes, and Grant shot five in 43 minutes. I just can't believe that all of those times Grant is driving to the hole, teams are stopping him with clean plays."

The Pistons entered the game first in the league in free-throw attempts at over 31 a game, but have only averaged 22 in the last five games. Stackhouse doesn't feel that is because of any change in Detroit's offense.

"I've only shot 20 free throws (actually 31), since the break and I haven't changed anything," he said. "It's just ridiculous to only shoot one free throw, and that one was because I made a highlight play. How can they shoot that many more free throws than we did they are a half-court team and we attack the basket."

"Grant is a great player, and they have a lot of excellent one-on-one players," he said. "To stop them, you have to throw a lot of team defense at them, and we did a good job of that tonight."

Indiana got 19 from Smits in the first half, but trailed 56-55. Smits had eight more in the third, and Indiana took a 84-82 lead on Miller's 3-pointer with less than a second left in the quarter.

Miller's shot inspired his teammates, as Croshere and Sam Perkins started the fourth with consecutive 3-pointers, giving the Pacers a 90-82 edge.

Detroit rallied for a 97-96 lead on Christian Laettner's two free throws with 6:13 to play. Indiana responded by scoring the next seven points.

Hill's dunk closed the Pistons to 108-105 with 2:11 left, but he missed a free throw that could have made it a three-point play.

Miller scored the next four points, moving the lead to seven with just 1:08 to play.

"You have to give Reggie credit he hit some really big shots when they needed them," Gentry said. "Lindsey did a nice job defensively on him, but he's a great shooter."

Miller said that having Smits in the middle opened things up for him.

"Rik really set the tone for us early, and he does that, it makes things easier," he said. "We ran our motion play a lot in the second half and I did a good job of taking Lindsey off the screen."