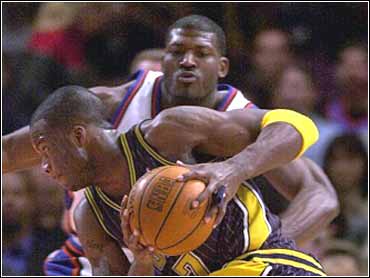 Reggie Miller says the New York-Indiana rivalry is dead. Given the lack of passion displayed by the Knicks on Sunday, they seemed to agree.

Jalen Rose shot 10-for-14 from the field and scored 24 points and the Indiana Pacers showed they, too, can play some dominating defense in an 87-74 victory over New York.

Holding their fourth straight opponent below 80 points, the Pacers took control early and never let the Knicks back into the game in the first meeting of the season between last year's Eastern Conference finalists.

"When they got rid of Patrick (Ewing), I considered it over because he was the cornerstone of this franchise and he was somewhat synonymous with the rivalry. So personally, to me, there is no rivalry because of that.

"It's still a big game because they are playing well, but there's no such thing as Pacers-Knicks anymore like there used to be," Miller said.

Miller added 18 points, Travis Best had 16 and Jermaine O'Neal 14 for the Pacers, who shut down two-thirds of New York's main offensive weapons by holding Allan Houston to 12 points and Glen Rice to two.

The Pacers snapped New York's three-game winning streak and dealt the Knicks, who lead the NBA in defense, just their second loss in the last 12 games.

"We didn't take them lightly, we just came out flat and didn't score the ball early," Sprewell said. "Defensively, we could have played better. We just had one of those offensive performances that won't get it done against most teams."

Austin Croshere hit a 3-pointer with 10 seconds left in the first quarter to give the Pacers a 23-12 lead, and New York finished the quarter with just two points from anyone other than Sprewell.

Knicks coach Jeff Van Gundy benched starting point guard Charlie Ward at the start of the second half, bypassing Chris Childs (who had knee tendinitis) and inserting third-stringer Erick Strickland. But with Strickland off-target from the field he shot just 1-for-7 Van Gundy later went to a big-guard alignment with no true point guard, only to see little improvement.

Rose scored Indiana's first 11 points of the third quarter before Best converted a driving layup to make it 59-50, and the closest the Knicks got the rest of the way was 65-58 on a putback by Kurt Thomas - who had 18 rebounds in place of the suspended Marcus Camby - with 8:58 left in the fourth.

The Pacers answered with a 6-0 run, then went back ahead by 15 when Miller made a 3-pointer with four minutes left.

"I'm satisfied with the progress even though there's still progress to be made," Rose said. "Basically the way I look at it is you've got a ton of guys still fighting for one bone in the jungle, and nobody's better than the next guy until you finally get it. I see us as the Eastern Conference champions and the Lakers as the NBA champions, and it's going to stay that way until somebody changes it."