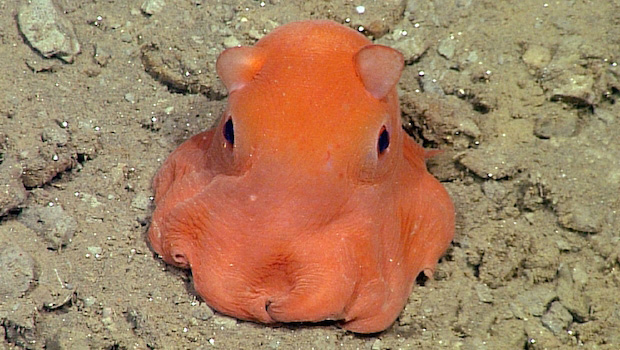 It looks like a ghost in the Pac-Man video game, has been compared to a Pokemon creature and served as the inspiration for the character Pearl in "Finding Nemo." But the oddly adorable octopus that scientists have taken to calling the flapjack still doesn't have a name.

The job of assigning an official moniker to the anonymous octopus from the genus Opisthoteuthis now falls to Stephanie Bush, a postdoctoral researchers at Monterey Bay Aquarium Research Institute (MBARI).

"As someone that's describing the species you get to pick what the specific name is," Bush told Science Friday. "One of the thoughts I had was making it Opisthoteuthis adorabilis -- because they're really cute."

Very little is known about this 7-inch-long deep-sea cephalopod. Specimens have been collected since 1990, but many questions remain about how it survives in such a hostile environment at depths of 984 to 1,476 feet.

Scientists have noticed it has an unusual way of getting around -- by moving its fins, pulsing its webbed arms or pushing water through its funnel for jet propulsion, or all three at once. It almost looks like it is unveiling a parachute as it drifts in the ocean.

The species is believed to linger on the ocean floor, swim up off the bottom and hover a bit, looking for small crustaceans, worms, and other food.

As part of its ongoing research in Monterey Canyon off the California coast, scientists from MBARI collected several of the octopuses live last year. Some survived at the Monterey Bay Aquarium, including one that laid eggs. The animals were briefly put on display but have since died, with most of them only living a few months, showing the challenges of mimicking their deep-sea environment.

The eggs, however, have been incubating for about year and there is still hope they will hatch. Deep-sea creatures often incubate their eggs for long periods. Another octopus discovered by MBARI guarded her babies for four-and-half years before they hatched.