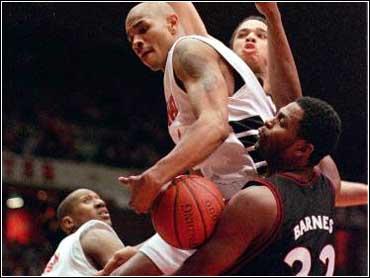 "We did everything you're not supposed to be able to do against Temple," Huggins said after the No. 15 Owls beat Cincinnati 77-69. "But they made the shots."

Huggins looked at the statistics in amazement. Cincinnati had 24 points in the paint to 12 for Temple; the Bearcats had twice as many points off turnovers and second-chance points.

"There were a lot of big shots that broke our hearts," said freshman DerMarr Johnson, who led Cincinnati with 16 points.

With Mark Karcher scoring 22 of his 28 points in the second half, Temple made the most of its usually gritty defense and rallied after Cincinnati took a seven-point lead, its biggest of the game.

"Coach told me to slow down and take what they gave me," Karcher said.

"He has a tendency to come off screens and just shoot it. But today he was a little more patient," said Temple coach John Chaney.

"He can hit that mid-range jumper. We had to do that to keep it out of the middle and away from the big guy."

Cincinnati had won 16 in a row tops in Division I and its home winning streak was at 42 before Temple ook command. The Owls have won 11 in a row, the most since the 1993-94 season.

"They're good," Huggins said. "They beat us today. But if we play them again, I don't know if they beat us again."

Chaney said beating Cincinnati might have been good for both teams.

"They can walk away knowing they lost a very close game and knowing they can win a game like this," Chaney said. "I don't think this is the worst thing that could have happened to them."

"Everybody keeps trying to convince me losses are good. I'm having a hard time with that," he said.

Temple's tight, matchup zone bothered Cincinnati all afternoon as the Owls delivered yet another blow to the Bearcats. It was Temple that knocked Cincinnati out of the NCAA tournament in the second round last year.

Cincinnati was unable to generate any perimeter offense in the early going. Temple, however, had no problems from outside.

Greer, who averages 12 points and has been shooting 36 percent from long range, came off the bench to go 5-of-5 in the first half.

"Greer has been instant offense for us," Chaney said. "He and Quincy they have been taking turns."

Temple led most of the first half, with Cincinnati's first lead coming with 1:25 left when Johnson hit the second of consecutive 3-pointers.

The Bearcats led 34-33 at halftime and cranked up its defense briefly at the start of the second half. That produced a 9-0 run in which Logan hit two 3-pointers. His second gave Cincinnati a 53-46 lead at 10:31.

But Cincinnati was not able to contain Karcher, who scored 13 points during a 16-8 run by Temple. From that point, Wadley took over, scoring eight points in the final three minutes.