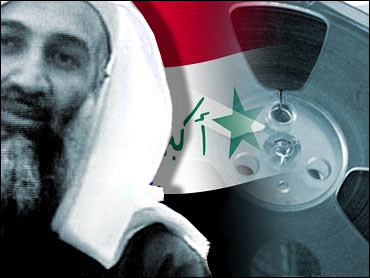 A speaker believed to be Osama bin Laden said on an audiotape that the U.S.-led war in Iraq was the beginning of the "occupation" of Gulf states for their oil and called on Muslims to keep fighting a holy war in the Middle East.

It was described as "47 minutes long" and of "unremarkable" quality. If U.S. intelligence learned anything else about Bin Laden's whereabouts or status from the tape, they aren't saying.

The voice on the audiotape, which was broadcast Sunday on the Al-Jazeera satellite channel, referred to recent events — including the Dec. 13 capture of former Iraqi leader Saddam Hussein and peace initiatives between Israel and the Palestinians.

Bin Laden's reference to Hussein's capture appears deliberate, as if to prove to the Arab world that although he hasn't been seen, he's still in command, reports CBS' Stewart.

The speaker urged Muslims to "continue the jihad to check the conspiracies that are hatched against the Islamic nation."

"Our intelligence team has analyzed it to determine whether it is authentic or not, and they have determined that it is likely that the voice on the tape is bin Laden's," White House press secretary Scott McClellan said. "Obviously we will continue to carefully review the contents of the tape."

Al-Jazeera played the audiotape while showing a still photo of bin Laden against a dark blue background.

"My message is to incite you against the conspiracies, especially those uncovered by the occupation of the crusaders in Baghdad under the pretext of weapons of mass destruction, and also the situation in (Jerusalem) under the deceptions of the road map and the Geneva initiative," the speaker said.

A Mideast peace plan dubbed the Geneva Accord was launched Dec. 1 by Israeli and Palestinian negotiators. The phrase "road map" refers to a U.S.-backed plan for a Palestinian state by 2005.

Ibrahim Hilal, Al-Jazeera's editor in chief, told The Associated Press the network received the message Sunday. However, he declined to reveal how it was delivered.

Hilal said he was certain the voice on the tape was bin Laden's.

"It is bin Laden's superb and special Arabic language that is very hard to emulate," Hilal said. "It is undoubtedly his voice, his style, and the typical examples from history he uses."

The original message was 47 minutes long but the network aired only 14 minutes, Hilal said.

In those excerpts, the speaker urged Muslims to "liberate the Islamic world from the military occupation of the Crusaders."

He said Gulf countries have given in to U.S. pressures "thinking that would not open the door for toppling of the dictatorial regimes by military force from outside, especially after they saw the capture of their previous comrade in treachery, a hireling of America," referring to Saddam.

He said the "big powers" were trying to control the region for its oil.

"The occupation of Iraq is the beginning of the full occupation of the other Gulf states. ... The Gulf is the key for control of the world in the point of view of the big powers because of the presence of the biggest deposits of oil."

British Foreign Secretary Jack Straw said Monday in London that he had no confirmation that the voice on the tape was bin Laden's but that it was a safe assumption.

"There is no question that the al Qaeda organization and its networks are still around. And so far as we know, Osama bin Laden is still alive," Straw told British Broadcasting Corp. radio.

U.S. intelligence officials say they did not need the latest tape to prove to them that Bin Laden is still alive. They've been absolutely convinced of that for some time, but, as with all things concerning bin Laden, they decline to say exactly why, reports Stewart.