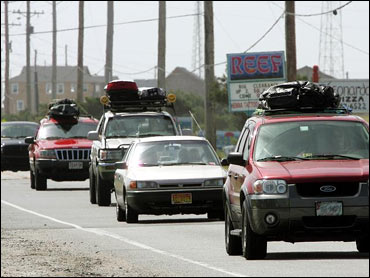 Hurricane Ophelia edged toward North Carolina early Wednesday, but many in the storm's path shrugged at the threat of flooding rain and wind even as officials urged them to evacuate.

Forecasts show the storm skirting the North Carolina coast Wednesday, then veering through Pamlico Sound, crossing the Outer Banks and heading back out to sea by late Thursday.

Late Tuesday, the National Hurricane Center upgraded the storm's status from a tropical storm to a Category One hurricane, saying maximum sustained winds had reached 75 mph with higher gusts. Further strengthening is possible, and because of the storm system, tornadoes could form along the North Carolina coast.

State and local officials, determined not to be caught off-guard after Katrina, blanketed the coast with a mix of voluntary and mandatory evacuations, closing schools and opening shelters. As of Tuesday night, nearly 100 people had checked into a shelter in an elementary school near downtown Wilmington.

A hurricane warning extends about 275 miles from the South Santee River in South Carolina to Oregon Inlet at Pamlico Sound in North Carolina, meaning hurricane conditions are expected within 24 hours.

Ophelia is now centered about 100 miles south of Wilmington and about 125 miles east of Charleston, S.C., drifting northward. The storm's effects are already being felt as heavy rains fell on the coast near the border of the Carolinas.

In Carolina Beach, south of Wrightsville Beach, officials reported a foot of water on one road due to heavy wind and a high tide.

The storm is moving very slowly, so heavy rain could linger over land and cause serious flooding. The hurricane center says up to 15 inches of rain is possible in eastern North Carolina.

Because of the slow motion of the hurricane and long reach of the storm, the hurricane force winds are expected to hit the coast well in advance of the center.

Some locals are likening Ophelia to a true nor'easter, reports CBS News Correspondent Cynthia Bowers. It's the slow-moving nature of this storm that led North Carolina's governor to declare a state of emergency and pre-position 300 National Guardsmen along the coast in the event they are needed for rescue in low-lying areas.

North Carolina Gov. Mike Easley says coastal residents should be prepared to go without power for two to three days.

"The beaches we expect to take a real beating," Easley said. "The bottom line is we're definitely going to get flooding, not just on the coast, but in low-lying areas as the rivers swell from the storm surge itself."

North Carolina has about 30 shelters open statewide and two utility companies, as a precaution, have recalled the workers they had sent to the Gulf Coast to help with the cleanup from Hurricane Katrina.

South Carolina Gov. Mark Sanford has called for a voluntary evacuation of oceanfront and riverside areas in the northeastern part of his state. Virginia Gov. Mark Warner has declared a state of emergency.

Unlike Hurricane Katrina, which made a head-on charge at the Gulf Coast two weeks ago, Ophelia has meandered since forming off the Florida coast last week. That makes landfall predictions difficult - and makes it harder for some to take the storm seriously.

"We're just having a grand time," said Diane Komorowski, a tourist from Philadelphia, as she walked through the choppy surf on the Outer Banks with her husband.

Some doubt that Ophelia will pack the same punch as Katrina.

Bruce McIlvaine of Logan Township, N.J., was among those who cleared out Tuesday, packing to leave Hatteras Island before his vacation ended.

"I don't really want to mess with it," he said. "You're on a spit of land a dozen miles into the ocean."

Along the exposed Outer Banks, all residents and visitors were ordered to evacuate Hatteras Island on Tuesday, visitors had been ordered off Ocracoke Island and the National Park Service closed the Cape Hatteras lighthouse and the Wright Brothers National Memorial in Kill Devil Hills.

Schools were closed in several coastal counties in the Carolinas, while classes were canceled at the University of North Carolina at Wilmington and East Carolina University in Greenville, S.C.

A surfer was missing along the South Carolina coast, with the search suspended because of rough seas.

Still, many people were taking a wait-and-see approach.

"We're levelheaded - we got common sense," said Nancy McKenzie, 57. She was shopping at a Nags Head candy shop that sold plastic bags filled with saltwater taffy and fudge for $4, with the label "Hurricane Ophelia official survival kit."